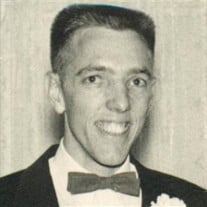 Rev. Harmon Thrasher, 82, of New Castle, went home to be with the Lord on the evening of Monday, March 16, 2015 at Kindred Transitional Care in Greenfield. He was born April 4, 1932 in New Castle, a son of the late Virgil and Artie (Smith) Thrasher. Rev. Thrasher was a 1951 graduate of New Castle High School. He attended the Frankfort Pilgrim Holiness College and earned his Bachelor of Theology Degree from International Bible Institute and Seminary in Plymouth, Florida. Harmon served in the U.S. Navy aboard the aircraft carriers, USS Boxer and USS Wasp. On February 15, 1957, he married the love of his life, Lilly Hill and together they enjoyed 58 years of marriage. In 1960, Rev. Thrasher entered the ministry and pastored churches primarily in the Church of the Nazarene in Indiana and Florida. Some of those churches included the Dublin Gospel Mission, Lawrence, Lakeland Florida, Redkey, Cambridge City and Shirley Churches of the Nazarene. He enjoyed basketball and the Andy Griffith Show. Rev. Thrasher was a loving and compassionate pastor, husband, father and grandfather. He is survived by his wife, Lilly Thrasher of Greenfield; a son, Jonathan (wife: Kathy) Thrasher of New Palestine; a daughter, Rebecca Thrasher of Anderson; grandchildren, Sam, Ben and Libby Thrasher; a sister, Nettie Michelson of New Castle; two brothers, Earl (wife: Carolyn) Thrasher of Muncie and Jim Thrasher of New Castle; a sister-in-law, Donna Thrasher of Indianapolis and several nieces and nephews. In addition to his parents, he was preceded in death by a daughter, Vonda Thrasher; a grandson, Daniel Jonathan Thrasher; two sisters, Vina Robinson and Anna Lines and a brother, Don Thrasher. Funeral services will be held at 10:00 a.m. Saturday, March 21, 2015 at Sproles Family Funeral Home with Dr. David L. Perry officiating. Burial will follow in South Mound Cemetery West Lawn Addition. Friends may call from 4 – 8 p.m. Friday at the funeral home. You may send the family a personal condolence at www.sprolesfamilycares.com. The Sproles family and staff are honored to serve the family of Rev. Harmon Thrasher.

Rev. Harmon Thrasher, 82, of New Castle, went home to be with the Lord on the evening of Monday, March 16, 2015 at Kindred Transitional Care in Greenfield. He was born April 4, 1932 in New Castle, a son of the late Virgil and Artie (Smith)... View Obituary & Service Information

The family of Rev. Harmon Thrasher created this Life Tributes page to make it easy to share your memories.

Send flowers to the Thrasher family.