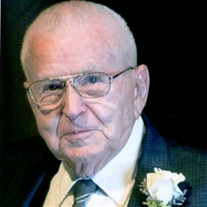 Harold Kenneth Utt, 90, of New Castle, passed away at home on the evening of Saturday, September 2, 2017 with his loving family by his side. He was born on July 3, 1927 in Superior, Wisconsin, a son of the late George Harold and Evelyn Mae (Ramsey) Utt. Harold served in the U.S. Navy during World War II. He married the love of his life, Mabel Foreman, on November 23, 1961 and they moved to New Castle in 1972. Harold sold automatic car wash systems for many years. He owned the Trojan Car Wash and the old Sears building on Broad St. Harold was a long-time member of First Presbyterian Church where he served as an elder and trustee. He was a 45-year member of the Lions Club and participated in seven Vision Missions trips to Mexico distributing eyeglasses to those in need. Harold was also a member of the Elks Lodge #484 and volunteered with Habitat for Humanity. For the past 22 years, he and Mabel have enjoyed serving at Presbytery Point Camp in Michigamme, Michigan. They were also very instrumental in bringing Henry County Young Life to New Castle. Those left to cherish Harold’s memory include his loving wife of 55 years, Mabel Utt; two daughters, Cheryl (husband: Tim) Paul and Karen (husband: Rich) Foster both of New Castle; four grandchildren, Ryan Paul (fiancée: Jessica Felts), Tyler Paul, Tricia (husband: Chase) Koger, and Becca Foster; a brother, George J. (wife: Linda) Utt of Duluth, MN and several nieces and nephews. In addition to his parents, Harold was preceded in death by a sister, Dorothy Sandstedt. Funeral services will be held at 11:00 am on Thursday, September 7, 2017 at Sproles Family Funeral Home with Rev. Wallace Wilson officiating. Burial will follow in South Mound Cemetery West Lawn Addition. Friends may call from 4 - 8 pm Wednesday and one hour prior to the service Thursday at the funeral home. Memorial contributions may be offered to the Lions Club, Habitat for Humanity or Henry County Young Life. The family would like to thank Henry County Hospice for their excellent care. You may send the family a personal condolence at www.sprolesfamilycares.com. The Sproles family and staff are honored to serve the family of Harold Kenneth Utt.

Harold Kenneth Utt, 90, of New Castle, passed away at home on the evening of Saturday, September 2, 2017 with his loving family by his side. He was born on July 3, 1927 in Superior, Wisconsin, a son of the late George Harold and Evelyn Mae... View Obituary & Service Information

The family of Harold Kenneth Utt created this Life Tributes page to make it easy to share your memories.

Harold Kenneth Utt, 90, of New Castle, passed away at home on...

Send flowers to the Utt family.