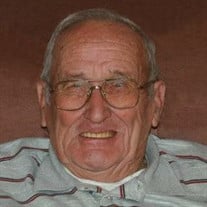 Harold Lindle Wilson, 85, of New Castle, passed away unexpectedly at home on the morning of Tuesday, September 22, 2015. He was born June 24, 1930 in Sloan’s Valley, Kentucky, a son of the late Luther Winford Wilson and Nora Lue (Young) Wilson. Harold moved with his family to New Castle in 1953 and began his career at Chrysler Corporation serving as a Union Steward and also in the Paint Department before retiring in 1990. Harold was a hard worker and in addition to his job at Chrysler, worked as a general contractor, roofing, building pole barns, grain bins, etc. He served in the US Army on the frontlines of Korea during the war. He loved young people and for many years was a Boy Scout Master. He was a member of New Castle Lodge No. 91 F&AM and Scottish Rite Valley of Indianapolis. He enjoyed spending time at his winter home in Panoma Park, Florida. He loved his dog, Trixie, and especially spending time with his family and grandchildren. He is survived by a son, Gary (wife: Shelley) Wilson, a granddaughter, Shelby Wilson and a grandson, Joshua Wilson all of New Castle; a step-son, Ricky Hughes of Naples, FL; a sister, Alice Shepherd of Carthage; beloved in-laws, Jean Dobbs, Faye and Jim Daily, Sue Johnston, Jimmy and Janie Wilson, June Wilson, A.J. and Joyce Davis, Brenda and Jerry Phelps and Shade Shepherd and several nieces and nephews. Harold is also survived by a host of dear neighbors who were more like family. Harold was preceded in death by his wife of 53 years, Juanita Wilson in 2013; a sister, Zella Shepherd; brothers, David, Arvel, Gene, and Berdell Wilson; his in-laws, Gilbert and Girtie Wilson; brothers-in-law, Harold Dobbs, Arthur Wilson, William Wilson and Ernest Johnston and a nephew, Dallas Wilson. Funeral services will be held at 11:00 a.m. Saturday, September 26, 2015 at Sproles Family Funeral Home with Pastor Larrel Boling. Burial will follow in South Mound Cemetery West Lawn Addition with military honors provided by contingents from the US Army, American Legion, and VFW. The family will receive friends from 9:00 a.m. until the time of service Saturday at the funeral home with a Masonic Memorial Service held at 10:30 a.m. Memorial contributions may be offered to the Henry County Sheriff’s Department Canine Unit with envelopes available at the funeral home. You may send the family a personal condolence at www.sprolesfamilycares.com. The Sproles family and staff are honored to serve the family of Harold Wilson.

Harold Lindle Wilson, 85, of New Castle, passed away unexpectedly at home on the morning of Tuesday, September 22, 2015. He was born June 24, 1930 in Sloan&#8217;s Valley, Kentucky, a son of the late Luther Winford Wilson and Nora Lue (Young)... View Obituary & Service Information

The family of Harold Lindle Wilson created this Life Tributes page to make it easy to share your memories.