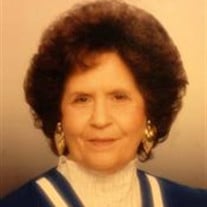 Harriet H. Webb, 82, of Muncie, went home to be the Lord on Friday, January 18, 2013 at Parker Health Care and Rehabilitation Center in Parker City. She was born August 9, 1930 in Greenville, Tennessee, a daughter of the late Hiram and Rora (Trivett) Harmon. Harriet attended schools in Greenville, TN and had worked at Foremost Dairies in Bristol, VA and Volunteer Textiles in Bristol, TN. She was a homemaker and especially loved the holidays and cooking for her family and friends. Harriet enjoyed and was gifted at crafts and interior decorating. She was a member of Fellowship Baptist Church. She is survived by a son, John M. (wife: Karen) Tillison of Muncie; a daughter, Barbara (husband: Paul) Murr of Sarasota, Florida; three grandchildren, Melissa (husband: Jim) Vanderlip of Las Vegas, Nevada, Amy (husband: Shane) Eller of Selma and Phillip Tillison of Middletown, Ohio; four great-grandchildren, Logan and Morgan Eller and Reagan and McKinley Tillison; a brother, Mont Harmon of Bristol, Tennessee; a sister, Bryson Martin of Massillon, Ohio and several nieces and nephews. In addition to her parents, she was preceded in death by her first husband, James Cecil Tillison; her second husband, James E. Webb; six brothers, Chester, Boss, Charles, Robert, Claude and Jack Harmon and two sisters, Nell Collins and Pauline Brown. Funeral services will be held at 11:00 a.m. Wednesday, January 23, 2013 at Fellowship Baptist Church, 2204 S. Macedonia Ave., Muncie, with Pastor Ron Elam officiating. Burial will follow in Tomlinson Cemetery. . Friends may call from 5 – 7 p.m. Tuesday at Fellowship Baptist Church and one hour prior to the service Wednesday at the church. You may send the family a personal condolence at www.sprolesfamilycares.com. Sproles Family Funeral Home is honored to serve the family of Harriet Webb.

Harriet H. Webb, 82, of Muncie, went home to be the Lord on Friday, January 18, 2013 at Parker Health Care and Rehabilitation Center in Parker City. She was born August 9, 1930 in Greenville, Tennessee, a daughter of the late Hiram and... View Obituary & Service Information

The family of Harriet H. Webb created this Life Tributes page to make it easy to share your memories.

Send flowers to the Webb family.