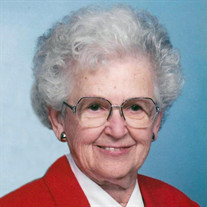 Helen F. Daily, 100, of New Castle, passed away on the evening of Saturday, February 21, 2015 at Stonebrooke Rehabilitation Center in New Castle. She was born August 16, 1914 in Coles County, Illinois, a daughter of the late Cameron E. and Josephine (Jackson) Malcom. Helen moved with her family to New Castle in 1928 and graduated from New Castle High School in 1932 and New Castle Business College. She worked in management for the W.T. Grant Co. during World War II and in the 1950’s was manager of Rose Court. In 1935, she married Ernest C. Daily. Helen was a member of Christ United Methodist Church and enjoyed being a part of the Chatterbox Euchre Club. She enjoyed cooking, playing cards and especially enjoyed spending time with her family and grandchildren. During Helen’s 100 years of life, she lived through the invention of the automobile, World War I, the Great Depression, Pearl Harbor and World War II, the Korean War, the assassination of President Kennedy, the Vietnam War, the Gulf Wars and the 9/11 attacks. She is survived by her son, Jim (wife: Faye) Daily of Burnside, KY; her grandchildren, Scott (wife: Stephanie) Daily of Green Bay, WI, Donna (husband: Scott) Baxter of Greensboro, NC and Joleene (husband: Steve) Molden of Toledo, OH; her great-grandchildren, Tabitha (husband: Kevin) Dossen, Cami Daily, Chase Molden, Cuyler Baxter, Auston and Brandon Collins; a great-great-grandson, Liam Dossen and several nieces and nephews. In addition to her parents, she was preceded in death by her husband, Ernest C. Daily; two brothers and a sister. Funeral services will be held at 1:00 p.m. Thursday, February 26, 2015 at Sproles Family Funeral Home with Pastor Larrel Boling officiating. Burial will follow in South Mound Cemetery West Lawn Addition. The family will receive friends from 11:00 a.m. until the time of the service Thursday at the funeral home. The family would like to acknowledge and express their appreciation to the family of Gilbert and Gertie Wilson for their loving care and support for many years. May God bless you all. You may send the family a personal condolence at www.sprolesfamilycares.com. The Sproles family and staff are honored to serve the family of Helen Daily.

Helen F. Daily, 100, of New Castle, passed away on the evening of Saturday, February 21, 2015 at Stonebrooke Rehabilitation Center in New Castle. She was born August 16, 1914 in Coles County, Illinois, a daughter of the late Cameron E. and... View Obituary & Service Information

The family of Helen F. Daily created this Life Tributes page to make it easy to share your memories.

Send flowers to the Daily family.