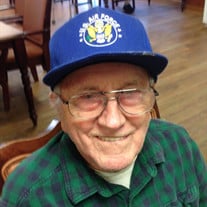 Rev. Henry “Hank” Smith, 91, of Plainfield, went home to be with the Lord on the evening of Friday, October 30, 2015 at Brownsburg Meadows. He was born January 2, 1924 in Erose, Kentucky, a son of the late Gilbert and MaLinda (Lawson) Smith. During WWII, Henry served in the US Army Air Force while stationed in England and was honorably discharged at the end of his term. Upon returning home he married his first wife, Mabel, and settled in Louisville, Kentucky. Their daughter, Kahla, at five years of age was instrumental in getting her daddy to attend church with her and her mommy. They found an everlasting friend in Jesus. Henry and Mabel had the privilege of not only praying with one of his brothers but seeing him healed at the same time. After being saved and sanctified, Henry felt the call to ministry. He was directed after much prayer to II Timothy 4:2. His earnest hope was to win as many to the Lord as he had influenced in his sinful life to go the wrong way. Following the death of Mabel, Henry married Doris Ruth Burt, a Christian day school teacher, on July 2, 1977. They continued in the ministry pastoring in the Louisville, Kentucky area and then moving to Plainfield, IN as the Associate Pastor of Calvary Bible Wesleyan Church. Henry and Doris invested much time in the outreach ministry of the church by visiting the elderly, sick and shut in. They were successful in leading souls to Jesus, including two of his brothers and a sister. “To God Be the Glory!” Those left to treasure his memory include his loving wife, Doris (Burt) Smith; two granddaughters, Crystal (husband: Harvey) McCarthy and Tammy Needy; two great-granddaughters, Molly and Sarah and many nieces and nephews. In addition to his parents, Henry was preceded in death by his first wife, Mabel Smith; his daughter, Kahla Maree Smith, and of his twelve siblings, he was the last to leave this world. Graveside services will be held at 11:00 a.m. Tuesday, November 3, 2015 at Resthaven Memorial Park, 4400 Bardstown Rd., Louisville, Kentucky, with Rev. Marcus Dodrill and Rev. Rollin Mitchell officiating. The family will receive friends from 6 – 8 p.m. Monday, November 2, 2015 at Calvary Bible Wesleyan Church, 168 Lawndale Dr., Plainfield, Indiana. Memorial contributions may be offered to the Calvary Bible Wesleyan Church Building Fund. You may send the family a personal condolence at www.sprolesfamilycares.com. The Sproles family and staff are honored to serve the family of Rev. Henry “Hank” Smith.

The family of Rev. Henry Smith created this Life Tributes page to make it easy to share your memories.