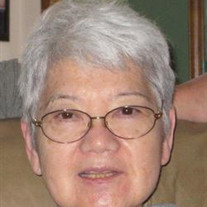 Hiroko “Ann” (Futami) Haney, 78, of New Castle, IN, died Friday, June 13, 2014 at The Waters of New Castle following a long but courageous battle with Parkinson’s disease. She was born January 1, 1936 in Tokyo, Japan, a daughter of the late Imazo and Mie (Saito) Futami. Ann married the love of her life, Walker Lee Haney, on April 17, 1957 and together they owned and operated the Flamingo Motel and Restaurant in Dunreith, IN, for many years. She enjoyed making quilts and dresses and was well known for her delicious pies. She is survived by three sons, Michael Lee (wife: Andrea) Haney of Puyallup, WA, Frederick Alan Haney of Moses Lake, WA and Kevin Patrick Haney of Orlando, FL; six grandchildren; two great grandchildren; a sister, Kimiko Sekita and a brother Takamasa (wife: Toshiko) Futami both of Tokyo, Japan. In addition to her parents, Ann was preceded in death by her husband, Walker Lee Haney, on June 15, 2008 and two sisters, Katsuko and Tomoko Futami. A Memorial Service honoring Ann’s life will be held at 11:00 a.m. Friday, June 20, 2014 at Sproles Family Funeral Home in New Castle, IN. Burial will follow in Glen Cove Cemetery in Knightstown, IN. Friends may visit with the Haney family from 9:30 a.m. until the time of service Friday at the funeral home. Memorial contributions may be donated to The Michael J. Fox Foundation for Parkinson’s Research at www.michaeljfox.org. You may send the family a personal condolence at www.sprolesfamilycares.com. The Sproles family and staff are honored to serve the family of Hiroko Ann Haney.

The family of Hiroko "Ann" Haney created this Life Tributes page to make it easy to share your memories.

Send flowers to the Haney family.