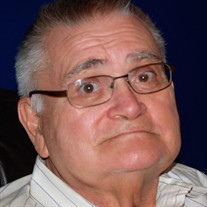 Homer Louis Carnes, 80, of New Castle passed away, surrounded by loved ones, on the evening of Friday, December 31, 2021 at The Waters of Martinsville. He was born on March 31, 1941 in New Castle, Indiana, a son of the late William Daniel and Sally V. (Thurston) Carnes. Homer proudly served in the United States Navy during the Vietnam War, attaining the rank of Petty Officer Third Class, and received an honorable discharge after serving from 1962 to 1966. He worked as in inspector for Chrysler Corporation in Kokomo for 31 years before retiring. He enjoyed camping at Bill Monroe Music Park, playing the guitar, particularly Bluegrass Country music. He also enjoyed researching military history. Homer loved watching western and mafia movies. He was an avid football fan, particularly Notre Dame Football. Homer was a proud member of the American Legion, Veterans of Foreign Wars (VFW), and a former member of the New Castle Police Department Merit Board. Homer was a devoted family man who would do anything for his family, and friends. He was resolute in his Christian faith and was ready to go home and be with the Lord. Those left to cherish his memory include his son, William Daniel (wife: Sarah) Carnes II, a nephew who was essentially a son, David (wife: Leann) Carnes and daughter, Angela Christina (husband: Chad) Breeding; a brother Cordell Carnes; beloved grandchildren, Cole and Caelen Carnes and several nieces, nephews and loyal friends. In addition to his parents, he was preceded in death by two brothers, Kenneth Carnes and William (Curt) Carnes; three sisters, Jane Carnes, Lois Davis and Norma Sanders. Homer loved deeply and he was deeply loved. He enjoyed giving much more than receiving. In lieu of flowers, please consider sending donations to the Gary Sinise Foundation to support America’s heroes and their loved ones. https://www.garysinisefoundation.org/donate/ Funeral services will be held at 11:00 am, Thursday, January 6, 2022 at Sproles Family Funeral Home with Pastor David Todd officiating. Burial will follow at South Mound Cemetery West Lawn Addition with military honors conducted by contingents from the Unites States Navy and American Legion. Friends may call from 4 – 7 pm, Wednesday, January 5, 2022 at the funeral home and one hour prior to the service Thursday. You may send the family a personal condolence at www.sprolesfamilyfuneralhome.com. The Sproles family and staff are honored to serve the family of Homer Carnes.

Homer Louis Carnes, 80, of New Castle passed away, surrounded by loved ones, on the evening of Friday, December 31, 2021 at The Waters of Martinsville. He was born on March 31, 1941 in New Castle, Indiana, a son of the late William Daniel and... View Obituary & Service Information

The family of Homer Louis Carnes created this Life Tributes page to make it easy to share your memories.

Send flowers to the Carnes family.