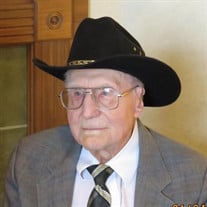 Hurley Levi Creech, 103, of Indianapolis, Indiana, formerly of Hawk Point, Missouri, went home to be with the Lord on the evening of Tuesday, June 16, 2015 at Meadow Lakes Senior Living Community in Mooresville, Indiana. He was born January 23, 1912 in Troy, Missouri, a son of the late George Thomas “Tommy” Creech and Mary Molly (Finley) Creech. Hurley was a 1931 graduate of Buchanan High School in Troy, MO where he majored in Vocational Agriculture and athletics. He competed in the 1-mile run in high school. He was employed at Ralston Purina, in research, where he studied the physical needs of animals and helped develop the best feed to produce fastest growth. On May 22, 1937, he married the love of his life, Marjorie Irene Fredde and soon after they purchased a farm in Hawk Point, MO that they lovingly tended for 57 years before moving to Indianapolis in 1999. In the early years on the farm, he and Marjorie worked hard to make the payments on the farm by Marjorie teaching school and helping out with egg production from Leghorn chickens they raised. Hurley enjoyed raising cattle, chickens and especially his registered Duroc Hogs. He succeeded in raising a 13-pig litter that was the top ton litter in MO and second heaviest in the nation. Besides the annual farm crops, he and Marjorie planted three large gardens and enjoyed canning the produce. Later, he took a home study course to operate heavy equipment. After completing the practical phase of his training in Homestead, FL, he worked as a hoisting engineer for over 13 years before having a near fatal truck accident in 1974. Hurley had an interesting and varied work career. Hurley was soundly converted at the Troy Holiness Church on April 14, 1952. When asked if he couldn’t accept the Lord, he would say, “yes, I can accept the Lord, but He won’t accept me.” He felt he had to make restitutions for his past sinful life first. After conversion, he would sometimes get happy and run in a church service. He later attended the Bellflower Holiness Church. For a time he was a member of the Wright City, MO, Church of the Nazarene where he served as Adult Sunday School Teacher and Usher. While in Indianapolis, he joined the Wesleyan Holiness Church where he attended with his sons. He was an active member of Gideon’s International both in Missouri and Indiana. Hurley enjoyed reading and playing Dominos with family and friends. He especially enjoyed writing and has published several booklets about his life. He is survived by two sons, Eugene “Gene” (wife: Anna Mae) Creech and George (wife: Lucille) Creech both of Indianapolis, IN; four grandchildren, Mary Beth (husband: Tom) Sproles of New Castle, IN, Diana (husband: Jonathan) Bond of Columbia, MO, Brian (wife: Melody) Creech of Indianapolis, IN, and Sylvia (husband: Dale) Taylor of Columbia, MO; 11 great-grandchildren, Sarah (husband: David) Sanford, Hannah and Daniel Sproles, Joshua and Melanie Bond, Isaac, Samuel and Joshua Creech, Alex, Austin and Aaron Taylor and several nieces and nephews. In addition to his parents, Hurley was preceded in death by his wife, Marjorie Creech, in 2006; a brother, Cecil “Jack” Creech and two sisters, Floy Mozier and Alma Hall. Funeral services will be held at 1:00 p.m. Tuesday, June 23, 2015 at McCoy-Blossom Funeral Home in Troy, MO with Rev. Tim Stuart and Rev. Edgar Wegener officiating. Burial will follow in Hawk Point Cemetery. Friends may call from 6 – 8 p.m. Sunday, June 21, 2015 at the Wesleyan Holiness Church, 5102 W. Minnesota St, Indianapolis, IN and from 11:00 a.m. until 1:00 p.m. Tuesday at McCoy-Blossom Funeral Home. Memorial contributions may be offered to Gideon’s International. You may send a personal condolence to the family at www.sprolesfamilycares.com. Arrangements have been entrusted to the care of Sproles Family Funeral Home in New Castle, IN.

Hurley Levi Creech, 103, of Indianapolis, Indiana, formerly of Hawk Point, Missouri, went home to be with the Lord on the evening of Tuesday, June 16, 2015 at Meadow Lakes Senior Living Community in Mooresville, Indiana. He was born January... View Obituary & Service Information

The family of Hurley Levi Creech created this Life Tributes page to make it easy to share your memories.

Send flowers to the Creech family.