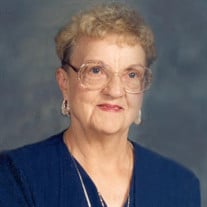 Idabelle Bolden, 84, passed away Friday, July 21, 2017 at her home in New Castle, Indiana. She was born on December 5, 1932 in Lewisville, a daughter of the late Emmett and Marie (McCorkle) Sorrell. Idabelle was a 1949 graduate of New Castle High School. She married Dennis Paul Bolden on June 28, 1951 in New Castle. In addition to being a wife and mother, Idabelle waitressed at several restaurants in New Castle and retired from Chrysler Corporation after 10 years of service. She was a member of Foursquare Church, taught church school for 3-5 year olds, served as co-director of the Foursquare Food Pantry Outreach Program for 12 years and held shirt sales to support the pantry outreach and Christmas program. Idabelle was also a member of New Castle Breakfast Optimist and a volunteer at the Henry County Youth Center until its closing. Idabelle was recently recognized as being a part of the New Castle Babe Ruth League for 60 years. She worked tirelessly alongside her husband, Denny, since the league’s inception in 1957. She helped with the city-wide canvas each year to raise money for the league and co-sponsored the Phares team. She was inducted into the Southern Indiana Babe Ruth Hall of Fame in 2005. Idabelle served on the league’s Board of Directors from 2003 – 2014 later becoming a Board Member Emeritus. In the early years, she carted players between practices and games, washed and repaired uniforms, made sure all players had shoes, hats and other equipment no matter what team the player played on. Of course, Phares was her favorite team. She was all smiles this summer watching her grandson, Josh, coach and her great-grandson, Eli, play for Phares. Idabelle carried on the Phares tradition of providing Dr. Pepper to the team at practice following a winning game and also making sure the players wore their uniforms correctly – hats forward and shirts tucked in to show respect for the team, the sponsor, and the league. Those left to cherish her memory include her son, Dane (wife: Molly) Bolden of Houma, LA; daughter, Denise (husband: Jeff) Cooper of New Castle; five grandchildren, Carlie Hopper, Zachary Bolden, Joshua Cooper, Lucas Bolden, and Lindsey Bolden; seven great-grandchildren, Jaxson Bolden, Hailee Woods, Eli Cooper, Lauren, Owen and Evan Hopper, and Jace Bolden and her sister, Toni Lynn Chase, San Diego, CA. Her family was the light of her life. Along with her parents, she is preceded by her husband, Denny Bolden on December 12, 1999; brother, Pete Sorrell and sister, Darlene Wright. A Celebration of Life service will be held at 11:00 am, Saturday, July 29, 2017 at Sproles Family Funeral Home with Pastor Jim Becker officiating. Burial will follow at South Mound Cemetery West Lawn Addition. In lieu of flowers, memorial contributions may be made to the New Castle Babe Ruth League Scholarship Fund, 3773 S. Timothy Ln, New Castle, IN 47362. Friends may call from 4-8 pm, Friday at the funeral home. You may leave a personal condolence at www.sprolesfamilycares.com The Sproles family and staff are honored to serve the family of Idabelle Bolden.

Idabelle Bolden, 84, passed away Friday, July 21, 2017 at her home in New Castle, Indiana. She was born on December 5, 1932 in Lewisville, a daughter of the late Emmett and Marie (McCorkle) Sorrell. Idabelle was a 1949 graduate of New Castle... View Obituary & Service Information

The family of Idabelle Bolden created this Life Tributes page to make it easy to share your memories.

Send flowers to the Bolden family.