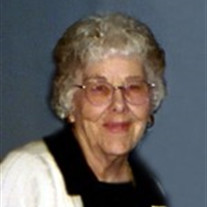 Ina Pauline Wools, 86, of New Castle, passed away Monday, March 1, 2010 at Maple Park Village in Westfield, Indiana. She was born March 1, 1924 in Clinton County, Kentucky, a daughter of the late Samuel Alonzo and Eulis (York) Blackburn. Pauline was a 1943 graduate of Straughn High School and also graduated from Victory Beauty School in Indianapolis. She was a hairdresser for many years and owned and operated several salons. She had been a member of the Eastern Star. She loved to bowl and play cards and enjoyed traveling, fishing and camping but, her greatest joy came from her family, especially her grandchildren. She is survived by three children; Duane (wife: Holly) Cory of Littleton, CO, Bruce Cory of Terre Haute and Alice Chamblin of Westfield; two step-children, Stephen (wife: Penny) Wools of Ft. Lauderdale, FL and Deborah (husband: Eric) Cox of Carmel; 19 grandchildren; and many great-grandchildren; a brother, Haskel (wife: Joanne) Blackburn of Cambridge City, a sister-in-law, Rosemary Blackburn of Cambridge City, and a brother-in-law, Archie Wools of Anderson; and several nieces and nephews. She was preceded in death by her husband, Vernon Wools in 2008; her first husband, Paul E. Cory in 1966; four brothers, Glen, Paul, Earl, and Delmer Blackburn and a sister, Judy D’Onofrio. Funeral services will be held at 1:00 p.m. Friday, March 5, 2010 at Sproles Family Funeral Home with Rev. Duane Cory officiating. Burial will follow in South Mound Cemetery West Lawn Addition. Friends may call from 11:00 a.m. until time of service Friday at the funeral home. Memorial contributions may be made to Deer Creek Church ~ Missions Endeavor, 8131 S. Pierce St. Littleton, CO 80127. You may send the family a personal condolence at www.sprolesfamilycares.com.

The family of Ina Pauline Wools created this Life Tributes page to make it easy to share your memories.

Send flowers to the Wools family.