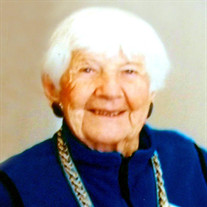 Inez Mae (Apple) Wood, 100, of New Castle, passed away early Saturday morning, April 11, 2015. She was born March 12, 1915 in Rush County, a daughter of the late Faran Brinton McClellan and Ida Bell (Clark) Apple. Inez was a graduate of the Class of 1933 from Mays High School and Ball State Teachers College in 1935. She was a teacher at the Soldiers and Sailors Home in Knightstown and later she opened the Wonderland Kindergarten for four years in her home. Inez also managed the Baker Park Pool and Concession and Tots and Teens Children’s Clothing Shop on South Main Street until the store closed. She then went to work at Sears and was manager of the Catalog Department, retiring in 1980 when the New Castle Sears closed. Following her retirement, she did babysitting at the Rose Bowl, Mt. Summit Christian Church and for several doctors. In 1992 she went to work at Walmart as a greeter and retired in 2008 at the age of 93. Inez was a life-long member of Center Christian Church in Mays. Inez loved being around her family and organized and hosted the annual family reunion. Her favorite times were spent swimming and enjoying her backyard. She often commented that there was no reason to go on vacation because she vacationed in her backyard. Inez married Charles (Chuck) Wood in 1936; they had three children, James (Jim) Wood, Jacqueline Jo Thomas and Robin L. Wood. She is survived by a son, James (Jerrie) Wood; a daughter, Jacqueline (John) Thomas both of New Castle; her grandchildren, John C. Thomas (Patty), Melody Kappauf (Wayne), Frank “Mike” Wood (Jessie), Deborah Garrison (Bruce), Micki Neal, Aaron Wood (Laura), Pamela Graber (Scott), Kiersten Howard (Denny), Sarah Radermacher (Ryan), Rob Wood (Giulianna) and Ryan Wood (Amy); 13 great-grandchildren; 5 great-great-grandchildren and several nieces and nephews. In addition to her parents, she was preceded in death by her husband, Charles (Chuck) Wood; a son, Robin L. Wood; brothers, Ola Apple, George Apple, Russell Apple and Leroy Apple and sisters, Mary Elizabeth Apple, Luva Menaugh and Clara Powers. Funeral services will be held at 12:00 noon on Wednesday, April 15, 2015 at Sproles Family Funeral Home with Pastor Bruce Garrison officiating. Burial will follow in South Mound Cemetery. The family will receive friends from 10:00 a.m. until the time of the service Wednesday at the funeral home. Memorial contributions may be offered to the Alzheimer’s Association or the American Cancer Society. You may send the family a personal condolence at www.sprolesfamilycares.com. The Sproles family and staff are honored to serve the family of Inez Wood.

The family of Inez Mae Wood created this Life Tributes page to make it easy to share your memories.

Send flowers to the Wood family.