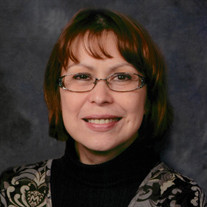 Isabel Jiménez de Mercer, 52, of Anderson, received ultimate healing from her Heavenly Father as He received her into heaven on the morning of Friday, April 22, 2016 at Community Hospital in Anderson. She was born April 5, 1964 in Santa Cruz, Bolivia, a daughter of Carlos Jiménez and Delicia Justiniano de Jiménez. Isabel met the love of her life, Steven Mercer, while he was on a brief missions trip to Bolivia with World Gospel Mission. They married on February 22, 1991 and recently celebrated their 25th anniversary. She earned a law degree while in Bolivia but chose to work with children as a daycare teacher at Park Place Children’s Center for 14 years. Isabel attended East Side Church of God and assisted in the Hispanic Ministry at First Church of the Nazarene where she often led singing. She loved singing and praising God, sharing her gift of hospitality and interceding for others in prayer. In addition to her parents of Bolivia, Isabel is survived by her husband, Steven Mercer; two sons, Nathan Mercer (fiancé: Abby Eddlemon) of Muncie and Kevin Mercer of Anderson; her sisters and brothers, Gina (husband: Mark) Jacobs of Sterling, IL, Carlos (wife: Erin) Jiménez of Bolingbrook, IL, Pablo (wife: Mirian) Jiménez of Florida and Rosemery (husband: Carlos) Jiménez de Weise of Santa Cruz, Bolivia; her father and mother-in-law, Leland and Linda Mercer of Anderson; brothers and sister-in-law, Scott (wife: Michele) Mercer of Anderson, Stuart (wife: Amy) Mercer of Middletown and Shelley (husband: Tim) Westerhof of Anderson; nieces and nephews, Molly Jacobs, Carlos, Elizabeth, Celeste and Yair Jiménez, Alejandro Weise, Luana Weise, Brittany (husband: Doug) Porter, James (wife: Malia) Mercer; Celena, Clayton, Treyford, and Emmaline Mercer and Dax Westerhof; great-nieces and nephews, Madison, Collin and Evelyn Porter; several aunts, uncles and cousins in Bolivia and the Pendleton Mercer family. She was preceded in death by her grandmother and namesake, Isabel Melgar Rojas. Funeral services will be held at 7:00 p.m. Tuesday, April 26, 2016 at Eastside Church of God, 2600 East 5th Street, Anderson, IN, with Pastors Elias Cabello and Kerry B. Robinson officiating. The family will receive friends from 4 – 7 p.m. Tuesday at the church. Graveside services will be held at 11:00 a.m. Wednesday in Grovelawn Cemetery in Pendleton. Arrangements have been entrusted to the care of Sproles Family Funeral Home in New Castle. Memorial contributions may be offered to the East Side Church of God for missions. You may send the family a personal condolence at www.sprolesfamilcares.com. The Sproles family and staff are honored to serve the family of Isabel Jiménez de Mercer.

Isabel Jiménez de Mercer, 52, of Anderson, received ultimate healing from her Heavenly Father as He received her into heaven on the morning of Friday, April 22, 2016 at Community Hospital in Anderson. She was born April 5, 1964 in Santa Cruz,... View Obituary & Service Information

The family of Isabel Jiménez de Mercer created this Life Tributes page to make it easy to share your memories.

Send flowers to the Mercer family.