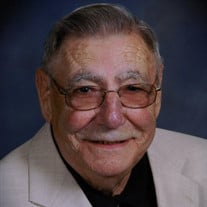 Jack L. Bailey, 85, of New Castle, passed away unexpectedly on the afternoon of Friday, July 24, 2015 at IU Health Ball Memorial Hospital in Muncie, following a lengthy illness. He was born November 30, 1929 in Greenfield, a son of the late Lewis and Nina (Bannister) Bailey. Jack was a 1948 graduate of New Castle High School. He served his country in the US Navy aboard an LST during the Korean Conflict and in later years enjoyed attending the annual reunions with his shipmates. Jack worked several years at Chrysler Corporation and then worked for over 30 years as a truck driver for Farm Bureau Co-op delivering petroleum. Jack was a member of the American Legion and a life-member of the Veterans of Foreign Wars (V.F.W.). He was a sports enthusiast and enjoyed golf, bowling, playing poker, horse racing, and especially enjoyed fishing for Walleye in Canada. He enjoyed spending time with family and friends and was most proud of raising his two daughters as a single father. Jack is survived by his wife, Martha (Garvey) Bailey; his daughters, Kim (husband: Gregg) Fowler of Murfreesboro, TN and Marisa Anderson of Indianapolis; his grandchildren, Michael Huckaby, Radnor Fowler and Amanda (husband: Blu) White; a great-grandson, Caden White; a sister, Mary Flynn of Muncie and several nieces and nephews. In addition to his parents, Jack was preceded in death by a brother, Robert Bailey; a sister, Norma Jean Anderson and son-in-law, Blake Anderson. Funeral services will be held at 1:00 p.m. Tuesday, July 28, 2015 at St. Anne Catholic Church with Deacon Russ Woodard officiating. Burial will follow in St. Anne Cemetery where military honors will be conducted by contingents from the US Navy, American Legion and V.F.W. The family will receive friends from 11:00 a.m. until the time of the service Tuesday at the church. Arrangements have been entrusted to the care of Sproles Family Funeral Home. Memorial contributions may be offered to St. Anne Church. You may send the family a personal condolence at www.sprolesfamilycares.com. The Sproles family and staff are honored to serve the family of Jack L. Bailey.

Jack L. Bailey, 85, of New Castle, passed away unexpectedly on the afternoon of Friday, July 24, 2015 at IU Health Ball Memorial Hospital in Muncie, following a lengthy illness. He was born November 30, 1929 in Greenfield, a son of the late... View Obituary & Service Information

The family of Jack L. Bailey created this Life Tributes page to make it easy to share your memories.

Jack L. Bailey, 85, of New Castle, passed away unexpectedly on...

Send flowers to the Bailey family.