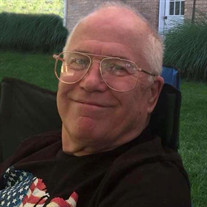 Jack Eugene Gooding, 86, of Muncie, went to be with the Lord on the morning of Sunday, February 3, 2019 surrounded by his family at home. He was born March 9, 1932 in Muncie, a son of the late Virgil Lafayette and Reba Charlene (Coulter) Gooding. Jack was a 1950 graduate of Muncie Central High School as well as a graduate from Valparaiso College and served his country as a radio man on a destroyer in the United States Navy during the Korean War. Jack also worked as an electronics technician for Delco Remy and retired in 1995 after 20 years. He was a man of faith and longtime member and Sunday school teacher at Cammack United Methodist Church. He loved the Lord, his family and his country. Jack was a lifelong “Cubbies” fan, HAM radio operator, enjoyed bird watching, spending time with his children, grandchildren, great-grandchildren and church family. Those left to cherish his memory include his wife, Marilyn (Wolfe) Cartwright Gooding, whom were married on January 5, 2013; two daughters, Julie (husband: Gary) Matchett of Muncie and Cheryl Randall of Yorktown; eight grandchildren, Zachary (wife: Lauren) Matchett, Jessica Matchett, Caitlin (husband: Zach) Dubravcic, Christian Matchett, Noah Matchett, Gabrielle Randall, Chase Randall and Pierce Randall; four great-grandchildren, Addison, Luke, Emily Matchett and Leo Leitheim; five siblings, Edwin (wife: Jeanne) Gooding, John Gooding, Jay (wife: Gloria) Gooding, Carolyn Harrell and Jerry Gooding. Along with his parents, he was preceded in death by his wife of 55 years, Janice J. Gooding (2011) and a sister, Marcia Jackson. In lieu of flowers, memorial contributions may be made to Cammack United Methodist Church, Muncie Mission or the Salvation Army of Muncie. Funeral services will be held at 4:00 pm on Thursday, February 7, 2019 at Cammack United Methodist Church with Pastor Jerry Thomas officiating. Friends may call from 2 – 4 pm prior to the service at the church. Burial will be held privately at Hawk Cemetery in Yorktown. Funeral arrangements have been entrusted to Sproles Family Funeral Home in New Castle. You may send the family a personal condolence at www.sprolesfamilycares.com.

Jack Eugene Gooding, 86, of Muncie, went to be with the Lord on the morning of Sunday, February 3, 2019 surrounded by his family at home. He was born March 9, 1932 in Muncie, a son of the late Virgil Lafayette and Reba Charlene (Coulter) Gooding. Jack... View Obituary & Service Information

The family of Jack Eugene Gooding created this Life Tributes page to make it easy to share your memories.

Send flowers to the Gooding family.