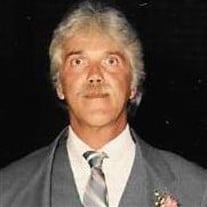 Jack H. Kirkpatrick, 76, of Avon, formerly of New Castle, passed away on September 26, 2017, unexpectedly at his home. He was born on July 20, 1941 in New Castle, a son of Clyde and Marjorie Gambrel (deceased 1962) Kirkpatrick Jack was 1960 graduate of New Castle Chrysler High School. He served in the United States Air Force from 1960 - 1963. Jack was a member of the United Transportation Union Local 1518 and worked for Conrail and CSX railroad companies for 36 years before retiring. He liked Nascar, drag racing and online poker. Jack was most known for his nice cars and friendly demeanor. He was a hard worker and provider for his family. Jack enjoyed being involved in the lives of his children and relaxing with friends and family. Those left to cherish Jack's memory include his step-mother, Nadine Kirkpatrick; two-children; Rodger (wife: Jennifer) Kirkpatrick of Auburn, IN and Michael Shane (wife: Kelly) Kirkpatrick of Lexington, KY; two-step-children, Karisa (husband: Mark) Hood of Avon, IN, and Travis Wood of Indianapolis, IN; 7 grandchildren; 2 great-grandchildren; siblings, Claude (wife: Trudy) Kirkpatrick of Arcanum, OH, Joyce Durman of Cincinnati, OH, Judy Hites of Crawfordsville, IN, Paul Kirkpatrick of Chesterfield, IN, and Nancy Driver of White Hall, MD, Beth Ann Schulte of New Castle, IN, Allen (wife: Carol) Weisheit of Superior, CO and numerous nieces and nephews. Along with his father he is preceded in death by his wife, Sandra Kirkpatrick (2011); mother, Marjorie Kirkpatrick (1962); a step-son, Jacob McDonaugh; sister, Linda Sue McCutchen; brother-in-laws, Tom Durman, Charles Driver and Richard Shulte. Celebration of Life at 2:30 pm on Saturday, November 11, 2017 at Sproles Family Funeral Home. Time of gathering from 12 noon until the time of service at the funeral home. You may leave the family a personal condolence at www.spolesfamilycares.com. The Sproles family funeral home and staff is honored to serve the family of Jack Kirkpatrick.

The family of Jack H Kirkpatrick created this Life Tributes page to make it easy to share your memories.

Send flowers to the Kirkpatrick family.