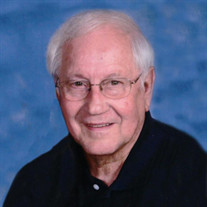 Jack L. Rains, 83, of New Castle, passed away on the morning of Sunday, May 2, 2021 at Community Hospital East in Indianapolis surrounded by his family. He was born on August 3, 1937 in New Castle, Indiana, son of the late Roger D. and Betty E. (Smith) Rains. Jack was a lifelong resident of New Castle and graduated in 1955 from New Castle Chrysler High School. Jack married the love of his life, Karen Sue Sampley, on June 25, 1961. Together they enjoyed traveling to the Smokey Mountains in Gatlinburg, TN, Treasure Island in Florida and their family cabin in Jackson County, IN. Jack attended the Indianapolis 500 every year since the 1960’s and his name is now honorably mentioned in the race program. He was a member of the New Castle Masonic Lodge and retiree of Chrysler Corporation. Jack was a Civil War enthusiast and read many books as well as visited Civil War sites. He enjoyed fishing, traveling and going to Indianapolis Indians and Cincinnati Reds games. He also enjoyed eating at restaurants and trying new foods, especially southern barbeque. Those left to cherish his memory include his two daughters, Kristi (husband: Scott) Duff of Indianapolis and Amy (husband: Larry) Scubelek of Fishers; three grandchildren, Alexandra Duff and Nicholas and Jordan Scubelek; a brother-in-law, Don (wife: Rosalie) Sampley of New Castle and several nieces and nephews. In addition to his parents, he was preceded in death by his wife, Karen Sue Rains (2017) and numerous extended family members. Friends may call from 1:00 – 2:30 pm, Friday, May 7, 2021 at Sproles Family Funeral Home. Funeral service and burial will be held privately with his family. In lieu of flowers memorial contributions may be made to the American Heart Association. You may send the family a personal condolence at www.sprolesfamilycares.com. The Sproles family and staff are honored to serve the family of Jack Rains.

Jack L. Rains, 83, of New Castle, passed away on the morning of Sunday, May 2, 2021 at Community Hospital East in Indianapolis surrounded by his family. He was born on August 3, 1937 in New Castle, Indiana, son of the late Roger D. and Betty... View Obituary & Service Information

The family of Jack L Rains created this Life Tributes page to make it easy to share your memories.

Send flowers to the Rains family.