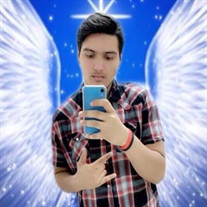 James Ethan Davis, 21, of Shelbyville, died unexpectedly early on the morning of Sunday, September 1, 2019 following injuries sustained in an automobile accident. He was born November 14, 1997 in Indianapolis, Indiana, a son of Roy Medina and Rebekah Ramos. James was a very likable, caring, and quiet young man. He was well respected by his friends and co-workers who said he was a “Good Dude.” James enjoyed playing video games with his friends and he especially loved basketball. During high school James played the center position on the Beech Grove Nazarene Christian School Basketball Team. James attended Southeastern Holiness Church where he was especially fond of his mentors, Jeremy and Tiffany Staley. He also attended Beech Grove Independent Nazarene Church where many of his friends attended. As a teenager, James enjoyed attending IHYC - International Holiness Youth Camp - in Greenfield. Those left to cherish James’s memory include his mother, Rebekah Ramos of Indianapolis, two sisters, Alexandra and Ariana Davis; a brother, Jeremiah Ramos; two uncles, Brian (wife: Amanda) Davis and their children of Shelbyville, with whom he was especially close, and Wesley (wife: Amy) Davis of Knightstown; an aunt, Kristie Armenta of Indianapolis, and many great aunts, great uncles, and cousins. He was preceded in death by his father, Roy Medina; his maternal grandparents, Paul and Betty Davis, and by an uncle, David Davis. Funeral services will be held at 11:00 am Friday, September 6, 2019 at Southeastern Holiness Church with Pastor Ron Stephens officiating. Burial will follow in Washington Park East Cemetery. Friends may call from 4 - 8 pm Thursday at the church. Arrangements have been entrusted to the care of Sproles Family Funeral Home in New Castle. Memorial contributions may be offered to the funeral home to assist the family with final expenses. You may offer the family a personal condolence at www.sprolesfamilycares.com. The Sproles family and staff are honored to serve the family of James Ethan Davis.

James Ethan Davis, 21, of Shelbyville, died unexpectedly early on the morning of Sunday, September 1, 2019 following injuries sustained in an automobile accident. He was born November 14, 1997 in Indianapolis, Indiana, a son of Roy Medina and... View Obituary & Service Information

The family of James Ethan Davis created this Life Tributes page to make it easy to share your memories.

Send flowers to the Davis family.