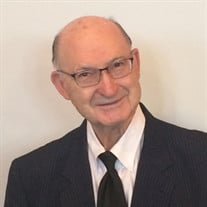 Dr. James L. Fulton, 83, of Westfield, slipped peacefully away to meet his Lord at 8:15 am on Tuesday, April 14, 2020 at Wellbrooke of Westfield. One of 14 children, James was born on October 22, 1936 at home near Sheridan, Indiana, a son of the late Virgil Franklin and Carrie Ethel (Mundy) Fulton. James was a humble man, always kind, always calm, devoted to God, devoted to his family, and devoted to those he served. He was a man whose walk and talk were identical. James loved to tinker with machinery and could “fix anything or fix it so no one could.” A deep thinker, James had an avid thirst for knowledge. He was a graduate of Sheridan High School and then earned his Bachelor of Science Degree from Butler University in 1958. James dedicated his heart to Christ in 1956 and later enrolled in Union Bible Seminary (UBS) in Westfield where he taught while earning a degree in education. While at UBS, James met the love of his life, Grace Hegwood. They were married on October 28, 1961 in LaGrange, WY. While feeling a call of God to missions, he spent time preparing and in 1966, James and Grace became missionaries to Bolivia where they served until 1976. They returned to Union Bible Seminary where James served in various capacities. In 1989, he and Grace returned to Bolivia finishing a second term in 1999. The crowning achievement of his scholastic career was when he received his Honorary Doctorate Degree from Union Bible College after 50 years of teaching. Those left to cherish James’s memory include his four children, Eunice (James II) McBryant of Cicero, Carol (Rodney) Farney of Sheridan, Stephen (Kimberly) Fulton Sr., of Traverse City, MI, and David (Leah) Fulton Sr., of Frankfort; 11 grandchildren, Elizabeth (Daniel) Xinico, James (Kimberly) McBryant III, David (Christa) Fulton Jr., Rachel (Abel) Dela Cruz, Carrie (Joshua) Kline, Sarah McBryant, Ashley (Andrew) Wilhelm, Stephen Fulton Jr., Joanna McBryant, Whitney (John) Boecker, and Amanda (Justin) Gross; 13 great-grandchildren; a brother, Clarence Fulton of Jamestown, TN, a sister, Delores Summitt of Kokomo, and many several nieces and nephews. He was preceded in death by his loving wife of 57 years, Grace Fulton on November 16, 2018; 11 sisters and brothers, Mary Overstreet, Esther Schafer, John Fulton, Paul Fulton, Ruth Michael, Lincoln Fulton, Florence Stern, Martha Mullin, Lawrence Fulton, George Fulton, and Bertha Robinson. Due to COVID 19 restrictions, services will be held privately with immediate family members only. James will be laid to rest beside his wife at Summit Lawn Cemetery in Westfield. At 7:00 pm Monday, April 20, 2020 and afterward, you may view a tribute to Dr. James L. Fulton offered by his son, Rev. David Fulton Sr. The video will be posted below. Arrangements have been entrusted to the care of Sproles Family Funeral Home in New Castle. Memorial contributions may be offered to Central Yearly Meeting of Friends Missions. Please mail to Nathan Covert. 8316 South Pleasant St. Daleville, IN 47334. You may send the family a personal condolence at www.sprolesfamilycares.com. The Sproles family and staff are honored to serve the family of Dr. James L. Fulton.

The family of Dr. James L. Fulton created this Life Tributes page to make it easy to share your memories.

Send flowers to the Fulton family.