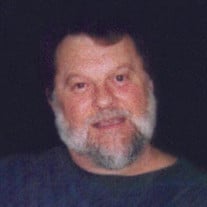 James H. “Jim” Weaver, 75, of New Castle, passed away peacefully at home on the morning of Wednesday, September 4, 2019, following a courageous three-year battle with Pulmonary Fibrosis. He was born October 8, 1943, in New Castle, a son of the late Herbert Weaver and Irene (Lindsey) Antic. Jim was a 1962 graduate of New Castle High School. He worked for Chrysler Corporation for 37 years retiring in 2001 and was a member of UAW #371. He married the love of his life, Linda Gooding, on March 17, 1990. Jim loved attending Cincinnati Reds ball games with his friends, watching NASCAR, camping, and especially spending time with his family and with his dogs, Shiloh and Molly. Jim was a lifetime member of the Eagles Lodge #933 and the Moose Lodge. Jim was a good and loyal friend to many. He was a member of Memorial Baptist Church. Those left to cherish Jim’s memory include his wife of 29 years, Linda Weaver; three sons, Wayne (Rev. Cheryl) Weaver of Champagne, IL, Shane Weaver of New Castle, and Kirby Weaver of Greenfield; a granddaughter, Cassia Weaver; four grandsons; a brother, Jeff (Jamie) Antic of Farmland, two sisters-in-law, Nancy Weaver of New Castle and Betty Gipe of Mt. Summit; a brother-in-law, Larry Gooding of New Castle; nieces, Angela (Tom) Rao of Prosper, TX, Gayle Soliday of Mt. Summit, Linda (Bill) Stewart of Clermont, FL, Kim (Mark) Koger of New Castle, and Gina (Brandon) Knotts of Noblesville; two nephews, Brandon Weaver of Fishers and a special nephew, Dale Frost of Mt. Summit as well as several great-nieces, and great-nephews including, Tristan and Luke Soliday, and Zachary, Kerstin, and Kayla Stewart, and also special friends, Kenny and Mary Cowan, Kris VanWey, and Ernie Lee and several cousins. In addition to his parents, Jim was preceded in death by a brother, William “Bill” Weaver; a brother-in-law, Dennis Gipe, and a brother-in-law and sister-in-law, Jerry and Sue Silver. Funeral services will be held at 11:00 am Tuesday, September 10, 2019, at Memorial Baptist Church with Pastor Tobby Smith officiating. Burial will follow in Green Hills Memory Gardens. The family will receive friends from 4 - 8 pm Monday at the funeral home. Memorial contributions may be offered to the New Castle Miracle League. You may send the family a personal condolence at www.sprolesfamilycares.com. The Sproles family and staff are honored to serve the family of James H. Weaver.

The family of James H. Weaver created this Life Tributes page to make it easy to share your memories.

Send flowers to the Weaver family.