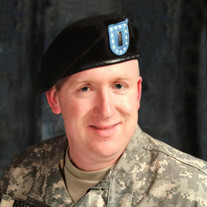 Jim Nelson – beloved husband, father, brother and son; empathetic counselor to thousands and devoted military veteran – lost a courageous battle with salivary duct cancer Thursday, May 13, at Ball Memorial Hospital in Muncie. He was 49. He was born Feb. 18, 1972, in Richmond, a son of Steve and Roberta Nelson. He provided counseling services in Henry County for more than 25 years. His work came in a variety of settings – Comprehensive Mental Health, New Castle Pediatrics, Charles A. Beard Memorial School Corp. as well as Henry Community Health’s Family and Internal Medicine. He also served the Richard Roudebush VA Medical Center in Indianapolis, working with Afghanistan and Iraq war veterans. Jim was a 1990 graduate of New Castle Chrysler High School, where he was a member of the Trojan Marching Band and ran cross country. He earned a Bachelor of Science degree in history from Ball State University in 1995, where he was a member of Alpha Tau Omega fraternity. He completed his master’s degree in social work at Indiana University in 2002, graduating with honors. The IU School of Social Work named him a distinguished alumni/social worker of the year in 2012. He was deployed in 2009 as part of Operation Iraqi Freedom. He served first as a lieutenant, then was quickly promoted to captain of the 55th Medical Unit, providing life-saving counsel to soldiers at multiple mental health clinics, including the Camp Liberty Mental Health Clinic. He was a member and chapter secretary of the United States Military Veterans Motorcycle Club. Survivors include his wife, Katy (McCormack) Nelson, who he married Aug. 5, 1995; two sons, Andrew, who just finished his freshman year at Purdue University; and Mark, who is finishing his freshman year at New Castle High School; his parents, Steve and Roberta Nelson of New Castle; his brother and sister-in-law, Drs. Tom and Abby Nelson. Visitation will be from 5 to 9 p.m. Friday, May 21, at Sproles Family Funeral Home in New Castle. A celebration of life will be held 11 a.m. Saturday, May 22, at First Presbyterian Church in New Castle with Pastor Rod Smith officiating. Burial will be in West Lawn Addition of South Mound Cemetery. In lieu of flowers, donations can be made to Wayne County Veterans Memorial Park, Trojan Aquatics Club or the New Castle High School Cross Country Team. Envelopes will be available at the funeral home or you may donate online here. Please specify memorial of choice in the note field. The Sproles family and staff are honored to serve the family of Jim Nelson.

The family of Jim Nelson created this Life Tributes page to make it easy to share your memories.

Send flowers to the Nelson family.