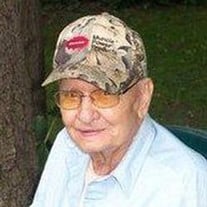 John D. Anderson, Sr., 97, of Dunkirk, passed away peacefully on Saturday, May 31, 2014 in his home. He was born January 10, 1917 in Scott County, a son of the late Ivan Alonzo and Sylvia Violet (Allen) Anderson. John, who lived a full life, grew up in Albany and lived in Dunkirk for more than 75 years. He worked for 43 years for Hart, Armstrong and Kerr Glass Companies in Job Development. He also worked part time as a carpenter and painter in order to provide for his family. He was a long-time member and Deacon of the First Baptist Church of Dunkirk and was a born again, baptized believer who lived the Christian life through his actions, opening his home and heart when others would not. He was an avid reader, gardener and farmer who enjoyed camping and spending time with his grandchildren and great-grandchildren. John was very accepting and open minded with all people. Every life he came into contact with was enriched and anyone who knew him was well aware of his genuine interest in them and others. He lived vicariously through others, always remembering the details they shared which were most important to them. He had a tremendous heart and was always forever young. He was an honestly good person and will be truly missed for his sense of humor, his advice, his knowledge and just the pleasure of being around him. He is survived by two sons, Robert “Bobby” (wife: Addie) Anderson of The Villages, FL and Steven “Steve” (wife: Linda) Yates of Fort Wayne; a daughter, Pamela (Anderson) (husband: Paul) Frazee of Muncie; a daughter-in-law, Penny Rose (Anderson) (husband: Randy) Young of Dunkirk and Florida; grandchildren, Kim (Anderson) (husband: Gary) Douglas of Prescott, AZ, Robert “Robbie” (wife: Sharla) Anderson of Vero Beach, FL, John Ross (wife: Ute) Anderson of Marion, Shane (wife: Kristi) Anderson of Warren, Brian (wife: Donita) Yates of Fort Wayne, Tonya (Yates) (husband: Robert) Belvin of Stuart, FL, David (wife: Sarah) Jones of Parker City, John “Tyler” (wife: Nikki) Caldwell of Muncie and Elizabeth “Beth” (Frazee) (husband: Clint) Childress of Knightstown; many great-grandchildren; two sisters, Mary June (Anderson) Kelly of Borden and Sylvia “Sally” Lou (Anderson) Montgomery of Crothersville; also surviving is his dear friend, Clayton Bilbry; and his pastor and friend, Tammy King-Phillips and her husband, Tommy Phillips, who provided the family with support and love. In addition to his parents, John was preceded in death by his wife of 65 years, Betty June (Siler) Anderson; a son, John D. Anderson, Jr.; a daughter, Audrey June (Yates) Jones; five brothers, Ralph, Ivan Wayne, Roy, Walter Dale and William Allen Anderson and three sisters, Opal Anderson, Nora (Anderson) Siler and Florence Charlene Anderson. A celebration of John’s life will held at 2:30 p.m. Sunday, June 8, 2014 at First Baptist Church in Dunkirk, 427 S. Main Street, with Pastor Tammy Phillips officiating. There will be a time of gathering at the church with food and fellowship following the service. Arrangements have been entrusted to the care of Sproles Family Funeral Home in New Castle. You may send the family a personal condolence at www.sprolesfamilycares.com. John’s family would like to thank the following for their gifts of service; Niece and Nephew, Debbie and Bob Kelly; Dr. Tina Lawson and her staff at Parkview; Troy Jones and At Home staff, Tina Gard-Martin; LifeStreams, Tina Chapman, mobile meals, Peggy; Care One; Ball Memorial Hospital Emergency staff and so many others. What joy and peace you provided our family.

John D. Anderson, Sr., 97, of Dunkirk, passed away peacefully on Saturday, May 31, 2014 in his home. He was born January 10, 1917 in Scott County, a son of the late Ivan Alonzo and Sylvia Violet (Allen) Anderson. John, who lived a... View Obituary & Service Information

The family of John D. Anderson Sr. created this Life Tributes page to make it easy to share your memories.

Send flowers to the Anderson family.