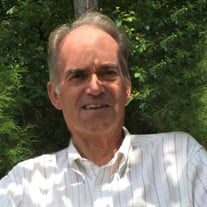 John B. Rossman, 75, originally of Emlenton, Pennsylvania, left his earthly body and met his Savior face to face in the early morning hours of Tuesday, June 21, 2022. He was born on February 21, 1947, the son of Charles Herbert “Herb” and Ruth (Wade) Rossman. He married his wife, Meredith “Mae” Fair, on September 2, 1966. Their four daughters, Denise, Diana, Veronica and Amy, along with their spouses, have blessed the family with 18 grandchildren and 19 great-grandchildren. John graduated from Covenant Foundation College in 1974 with a Bachelor of Theology degree. He was a private pilot, an airplane mechanic and enjoyed playing saxophone, wood working and carving. John was also an excellent artist. John was a people person. He loved people. He loved making people laugh and was always up for a good joke. One of his greatest thrills was teaching his grandchildren songs of his own creation that would make their parents cringe. In 1969, John and Mae found Jesus at an Allegheny Wesleyan Methodist Church in Butler, PA. This conversion experience would chart the course for their future. John’s passion was missions, and in December of 1976 he answered God’s call and moved his family to Lesotho, Africa, where they served as missionaries to the African people. John later served in the pastoral role to various churches across the United States. Funeral services will be held at 3:00 PM, Friday, June 24, 2022 at the Pilgrim Holiness Church 1308 Riley Road, in New Castle, with President Daniel Durkee officiating. Burial will follow at South Mound Cemetery West Lawn Addition. Friends may call from 2 – 3 PM prior to the service at the church. You may send the family a personal condolence at www.sprolesfamilycares.com. The Sproles family and staff are honored to serve the family of John Rossman.

The family of John B. Rossman created this Life Tributes page to make it easy to share your memories.

Send flowers to the Rossman family.