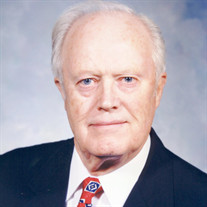 John E. Taylor, 90, of New Castle, IN, formerly of Clarksville, TN, passed away at his home surrounded by his family on Thursday, October 13, 2016 after several months of illness. He was born on January 14, 1926 in Mercer, Tennessee, a son of the late Vester T. and Annie Charmlin (Ford) Taylor. John grew up in Mercer, TN and graduated from Mercer High School in 1943. He was drafted into the Army in 1944 and served during WWII. After WWII, he continued his career in the Army for nearly 25 years before retiring. He was stationed in Puerto Rico, Panama and Korea. After the Army, he worked for the Federal Civil Service stationed in Anchorage, Alaska and retired after 17 years. John was initiated into the Army Masonic Lodge, A.F. & A.M. in Balboa Panama Canal Zone in 1954 and earned 32nd degree as a Mason. His current Shrine membership is with Al Menah Shrine Temple in Nashville, TN. He is a life member of Gatun Blue Lodge and Balboa Scottish Rite, both in the Republic of Panama. He was also a lifetime member of Maple Springs Baptist Church in Mercer, TN. John enjoyed fishing and being with his family. Those left to cherish his memory include his wife of 47 years, Florence “Dottie” (Stephens) Taylor; son, Richard (wife: Maureen) Taylor of Holiday, FL; three grandchildren, Shane Taylor of Holiday, FL, Zachary Taylor of Annapolis, MD, and Brandi Taylor of Fort Collins, CO. Brothers, Bobby A. (wife: Patsy) Taylor and Billy (wife: Nancy) Taylor both of Mercer, TN; three nieces, Bonnie, Cindy and Sandy; two nephews, Bill and David and several cousins. Along with his parents, he is preceded in death by a dear cousin Elsie Melton. Funeral services will be held at 3 p.m. on Tuesday, October 18 at Sproles Family Funeral Home with Pastor Jerry Ingalls officiating. Burial will follow at South Mound Cemetery. Those honored to be pallbearers, Bill Taylor, David Taylor, Shane Taylor, Zachary Taylor and Bill Weidlich. Friends may call from 1 p.m. until the time of service at the funeral home. Masonic memorial service to begin at 2:45 p.m. In lieu of flowers, memorial donations may be made to the Shriners Children’s Hospital or the Henry County Hospice. You may send the family a personal condolence at www.sprolesfamilycares.com.  The Sproles family and staff are honored to serve the family of John Taylor

John E. Taylor, 90, of New Castle, IN, formerly of Clarksville, TN, passed away at his home surrounded by his family on Thursday, October 13, 2016 after several months of illness. He was born on January 14, 1926 in Mercer, Tennessee, a son... View Obituary & Service Information

The family of John Edwards Taylor created this Life Tributes page to make it easy to share your memories.

Send flowers to the Taylor family.