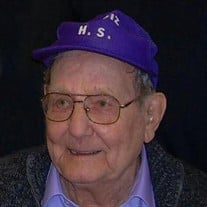 Joseph A. Haskett, 93, of New Castle, passed away peacefully on the evening of Tuesday, December 8, 2015 in his home surrounded by his loving family. He was born October 20, 1922 in Cadiz, a son of the late Carl and Hazel (Brown) Haskett. Joe was a 1941 graduate of Cadiz High School where he started the high school baseball team in 1938 and played as a catcher. He was also a graduate of Farmland Bible College. He served in the U.S. Army during WWII and was in five major campaign battles earning five bronze stars. While serving in the Army he drove supply trucks in Germany, France, Belgium and Holland. Joe worked as a plumber while living in Georgia and for many years as a Journeyman Pipe Fitter at Delco Remy. He was an avid CB operator in Muncie with channel 1and his handle was “Crazy Joe.” Those left to cherish Joe’s memory are a daughter, Renae Gawith of New Castle; two step-daughters, Letha Chalfant of Muncie and Anna Stocker of Albany, Kentucky; two step-sons, Joe York of Oklahoma and John York of Muncie; grandchildren, Joey (wife: Michelle) Haskett, Dennis (wife: Theresa) Haskett, Kenneth (wife: Angela) Haskett, Michael (wife: Michelle) DeWalt, Jeremy (wife: Joy) DeWalt, Scott (wife: Kayla) Melton, James (wife: Jamie) Miller, Carl (wife: Lisa) Miller, Andrea Boggs, Anthony York, Helen Renae (husband: Matt) Anderson, Lori Rodeffer, Courtney, Candy and Desiree York; 29 great-grandchildren and several nieces and nephews including Curt Alspaugh. In addition to his parents, he was preceded in death by his first wife, Bonna (Underhill) Haskett in 1996; his second wife, Nell (York) Haskett in 2014; a son, Tommy Joe Haskett in 2005; two brothers, Albertus and Erman Haskett and a sister, Nora Muterspaugh. Funeral services will be held at 1:00 p.m. Friday, December 11, 2015 at Sproles Family Funeral Home with Rev. Gene Bennett and Rev. Michael Dees officiating. Burial will follow in Tomlinson Cemetery in Muncie with military honors conducted by contingents from the US Army and the American Legion and VFW. The family will receive friends from 11:00 a.m. until time of service Friday at the funeral home. You may send the family a personal condolence at www.sprolesfamilycares.com. The Sproles family and staff are honored to serve the family of Joseph A. Haskett.

Joseph A. Haskett, 93, of New Castle, passed away peacefully on the evening of Tuesday, December 8, 2015 in his home surrounded by his loving family. He was born October 20, 1922 in Cadiz, a son of the late Carl and Hazel (Brown) Haskett. Joe... View Obituary & Service Information

The family of Joseph A. Haskett created this Life Tributes page to make it easy to share your memories.

Joseph A. Haskett, 93, of New Castle, passed away peacefully...

Send flowers to the Haskett family.