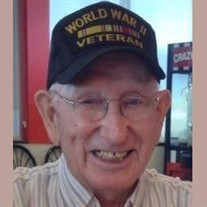 Junior Forrest Sneed, 90, passed quietly into the arms of Jesus early on October 8th at Addison Place Assisted Living. Junior was born June 21, 1926, in New Castle, Indiana, the youngest of Alvie and Mae Sneed’s five boys. The family moved to Greensboro around 1933, and Junior lived on that same parcel of land until he entered assisted living in October of 2014. He was preceded in death by his parents and his brothers, Jimmy, Ira, Eddie, and Bob, and his sweetheart of nearly 56 years, Martha Ashby Sneed, who passed away in December of 2010. Junior was a World War 2 U.S. Army veteran, seeing heavy action in the Philippines and then serving in Japan, where he contracted spinal meningitis, an illness that took most of his hearing. Following his honorable discharge, Junior worked briefly in New Castle before hiring on at Delco Remy in Anderson in 1946. He worked at several DR plants over 45 years before retiring in 1991. In his retirement years, Junior was an avid golfer. Junior has been a member of Grace Baptist Church of New Castle for over 40 years, actively serving the congregation wherever he could. He never met a stranger or turned away someone he could help, and he could fix almost anything, especially motors. Junior is survived by his three children, Tena Cottman (Rick) of New Castle, Necia Ramsey of Anderson, and Barry Sneed (Bonnie) of Greenwood. He will be missed by his grandchildren, Jeremy Searcy of Carthage, Jonathan Ramsey (Ashley) of Columbus, Ohio, Sara Coleman of Anderson, Nathan Sneed, Michael Sneed, and Joshua Sneed, all of Greenwood, and his great-grandson, Carson Ramsey of Columbus, Ohio. The family would especially like to thank the residents and staff of Addison Place Assisted Living for their loving friendship and care for Junior over the past 15 months. Calling will be on Tuesday, October 11, from 4 - 7 p.m. at Sproles Family Funeral Home, New Castle, with the memorial service to follow at 7 p.m. The family will hold a private graveside service the following day. You may send the family a personal condolence at www.sprolesfamilycares.com. The Sproles family and staff are honored to serve the family of Junior Forest Sneed.

The family of Junior Forrest Sneed created this Life Tributes page to make it easy to share your memories.

Junior Forrest Sneed, 90, passed quietly into the arms of Jesus...

Send flowers to the Sneed family.