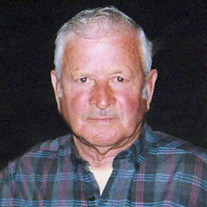 Kay Morgan, 82, of New Castle, passed away Tuesday, September 9, 2014 at St. Vincent Seton Specialty Hospital in Indianapolis. He was born December 15, 1931 in Hidalgo, in Wayne County, Kentucky, a son of the late Oda McKay Morgan and Leila (Bridgeman) Morgan. Kay worked for Toyoshima Special Steel Co. in Indianapolis retiring in 1998. He previously worked at the Trainor Springs Factory in New Castle. He was a member of the Bass Angler’s Club. He enjoyed all things outdoors, hunting, fishing and camping and was never without his slingshot. He also enjoyed bowling and pickin’ his guitar. Most of all he loved spending time with his family and his longtime companion, a blue heeler, Tiger. Kay is survived by two children, Lisa K. (husband: Joe) Pittman and Randy Alan (wife: Trena) Morgan both of New Castle; eight grandchildren, Nathan (wife: Nickie) Walker of Spiceland, Christopher Marcum of Indianapolis, Justin (wife: Rachel) Walker of Cleveland, Ohio, Spenser Morgan of Indianapolis, Allison Pittman of Des Moines, Iowa, and Lindsay Pittman, Avery Pittman and Collin Day all of New Castle; five great-grandchildren; a brother, Ford (wife: Olene) Morgan of Monticello, KY, two sisters-in-law, Joyce Stone and Wilma Wooten both of New Castle; his former wife, Kletis (husband: Bret) Horton of New Castle and several nieces and nephews he was especially close to. In addition to his parents, he was preceded in death by his sister, Aderene Catron and three brothers, Wendell, Hobart and Stanley Morgan. Funeral services will be held at 2:00 p.m. Friday at Sproles Family Funeral Home with Rev. Theron Smith officiating. Burial will follow in South Mound Cemetery. The family will receive friends from 4 – 8 p.m. Thursday and one hour prior to the service on Friday at the funeral home. You may send the family a personal condolence at www.sprolesfamilycares.com. The Sproles family and staff are honored to serve the family of Kay Morgan.

The family of Kay Morgan created this Life Tributes page to make it easy to share your memories.

Send flowers to the Morgan family.