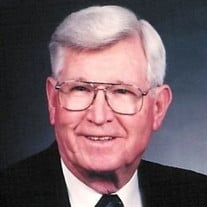 Kenneth P. Stetler, 85, of Rising Sun, Indiana, was ushered by angels from his earthly home into the presence of Jesus on the afternoon of Saturday, August 16, 2014. He was born April 27, 1929 in Attica, Indiana, a son of the late Dewey Ellsworth and Ethel Ona (Ross) Stetler. Rev. Kenneth Stetler grew up working as a farm hand on a large Northwestern Indiana farm. His early life's goal was to own a farm and to raise show crops and animals. Then, God began to change those plans and prepare him for a much larger work that would take him well beyond the flat lands of Indiana with an influence that would touch thousands of lives. One day as he was plowing corn, conviction gripped his heart. He stopped the tractor, bowed in a nearby ditch and asked God to save him. That prayer changed him and his plans. Soon, he was heading to God's Bible School & College in Cincinnati, Ohio, to study for the ministry. When he arrived on campus, his possessions were in cardboard boxes tied up with binder twine. The cab driver who dropped him off at the school assured him that the office was in "that building" - pointing to the girl's dorm! That embarrassing moment was his introduction to a school that became his home for the next 40 years. Rev. Stetler graduated from God's Bible School and College with both Th.B. and A.B. degrees. Following his graduation, he was hired by the college as a professor, a position that he retained most of his adult life. He also served the college as Dean of Men. Concurrent with his teaching years, he pastored a Pilgrim Holiness Church in Falmouth, Kentucky and a Free Methodist church in eastern Cincinnati. When the Free Methodists chose to move to the suburbs of the city, he went back to the same area and established East End Chapel. Services were held in a former tire store, and the Stetler family lived above the chapel in an apartment. Rev. Stetler also filled in as pastor at Mount Carmel Wesleyan Mission and the Loveland Wesleyan Chapel, both in the Cincinnati area. In the 1970's, he started the United Holiness Church in the Swifton section of Cincinnati. In 1975, he moved to Salem, Ohio and served for three years as Academic Dean of Allegheny Wesleyan College. He then returned to God's Bible School & College where he taught until retirement. Rev. Stetler has a M. Ed. degree from the University of Cincinnati and an honorary Doctor of Divinity Degree from God's Bible School and College. His retirement years were spent in Rising Sun, Indiana, where he returned to his roots by having a large garden. He loved the soil and the joy of tilling and harvesting its fruit. He enjoyed his family and had a unique ability to make every child, grandchild and great-grandchild feel special and needed. His sphere of influence also included his many neighbors and friends in the Rising Sun area. Hundreds of students who sat under his instruction are now pastoring, teaching, and doing mission work around the globe. Rev. Stetler was known for his faithfulness, his humility, and his kindness to everyone. Only heaven will reveal the true accomplishments of a humble man who gave his all to God. Rev. Stetler is survived by his faithful companion and the love of his life, Jewel (Lamb) Stetler, whom he married on July 21, 1950; six children, P. Daniel (wife: Joan) Stetler of Hobe Sound, FL, David (wife: Marsha) Stetler of Mt. Airy, NC, Darrell (wife: Regina) Stetler of Burlington, KY, Frances Stetler of Penns Creek, PA, Stephen (wife: Beth) Stetler of Edinburg, TX and Trilinda Stetler of Rising Sun, IN; 16 grandchildren, Aimee (husband: Chad) Snyder of Altamont, KS, Paul Stetler of Hobe Sound, FL, Elisa (husband: Mark) Calderon of Oklahoma City, OK, Julie Stetler and Sarah Stetler both of Hobe Sound, FL, Brent (wife: Denisa) Stetler of Frankfort, IN, Kendall (wife: Sherri) Stetler of Liberty, SC, Kelly Stetler and Benjamin (wife: Stacey) Stetler both of Hobe Sound, FL, Alisha Stetler of Mt. Airy, NC, Darrell Lee (wife: Elizabeth) Stetler II of Oklahoma City, OK, Merrilee (husband: Brant) Luther of Alliance, OH, Sherilyn (husband: Andrew) Stroud and Kenneth Stetler both of Burlington, KY, Kent Stetler and Maria Stetler both of Cincinnati, OH; 10 great-grandchildren, Gracie, Darrell Lee III, Heath, Caleb, Gideon, Brett, Brooke, Bryland, Wilson and Marshall; his eleventh great-grandchild, Clarke Daniel Calderon, will be soon arriving. Also surviving are three sisters, Marjorie Poe of Frankfort, IN, Pat (husband: Dave) Burris of Attica, IN and Emma (husband: Ed) Highlander of Frankfort, IN; a brother, Monte (wife: Mary) Stetler of Columbus, IN; a brother-in-law, Charles Marck of Logan, OH; a sister-in-law, Charlotte Stetler of Phoenix, AZ and several nieces and nephews. In addition to his parents, Rev. Stetler was preceded in death by three sisters, Dorothy Tharp, Naomi Marck and Mary Kerns and a brother, James Stetler. Rev. Stetler attended the Burlington Bible Methodist Church and desired that his service be held there. However, due to space limitations, the family sought larger accommodations nearby. The family would like to express heartfelt thanks to the Burlington Baptist congregation for opening their facility to our family. Funeral services will be held at 11:00 a.m. Saturday, August 23, 2014 at the Burlington Baptist Church, 3031 Washington St., Burlington, KY, with his four sons officiating. Burial will follow in Cedar Hedge Cemetery in Rising Sun, Indiana. The family will receive friends from 4:00 p.m. until 8:00 p.m. Friday at the church and an hour prior to the service Saturday. Arrangements have been entrusted to the care of Sproles Family Funeral Home, New Castle, Indiana. You are invited to send the family a personal condolence at www.sprolesfamilycares.com. The Sproles family and staff are honored to serve the family of Rev. Kenneth P. Stetler.

Kenneth P. Stetler, 85, of Rising Sun, Indiana, was ushered by angels from his earthly home into the presence of Jesus on the afternoon of Saturday, August 16, 2014. He was born April 27, 1929 in Attica, Indiana, a son of the late Dewey Ellsworth... View Obituary & Service Information

The family of Kenneth P. Stetler created this Life Tributes page to make it easy to share your memories.

Send flowers to the Stetler family.