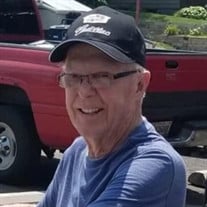 Kermit C. Razor, 83, of New Castle went home to be with the Lord on the morning of Tuesday, December 21, 2021 at Henry Community Health. He was born on August 10, 1938 in New Castle a son of Manuel W. and Lucille (Armstrong) Razor. Kermit attended and graduated from New Castle High School in 1956. He honorably served in the United States Air Force for four years where he was stationed in Japan, Taiwan and Hawaii. Kermit flew with pilots on large transport aircraft and taught them airplane mechanics. Following his service he married, Jacqueline Sue Covey in 1962. Kermit worked for Westinghouse in Muncie for 33 years and retired at the age of 58. He had a love for the game of golf, always trading golf clubs and playing at Memorial Park Golf Course where he made two hole-in-one shots. Kermit was a mechanic at heart and tinkered with cars, worked in the yard around the house, rode his golf cart through the neighborhood and taught himself to play the Ukulele. He enjoyed all animals, especially dogs and feeding the birds, squirrels and deer. Kermit married Mary Kay Denney on July 11, 2015. Together they enjoyed watching wildlife from their back porch, spending time together and attending Holy Trinity Lutheran Church. Kermit was quiet and funny, but never complained about his life-long battle of health complications. The doctors often referred to him as amazingly strong. He will be remembered as a man with a sweet gentle soul. Those left to cherish his memory include his loving wife of over 6 years, Mary Kay Denney; children, Jeff Razor of Cumberland, Shawn (Chris) Razor of Indianapolis, Tami (Larry) Foster of New Castle, Beth (Tim) Moore of Greenfield and Michelle Denney of New Castle; grandchildren, Jacob Alexander Razor, Cassidy (Austin) Tuttle, April Foster (Heather Link), Tori (Jeremiah) Lane, Taylor (Coy) Hanson; brother, Kim (Kris) Razor of Indianapolis; several great-grandchildren, nieces, nephews and many special golfing buddies. He was preceded in death by his parents, Manuel and Lucille Razor; his first wife, Jacqueline Razor; a son, Christopher Scott Razor; a sister, Loretta Moscrit and step-mother, June Razor. Funeral Services will be held at 10:00 am, Tuesday, December 28, 2021 at Holy Trinity Lutheran Church in New Castle with Pastor Matthew Masko officiating. Burial will follow at Hillsboro Cemetery with military honors conducted by contingents from the United States Air Force and American Legion. Friends may call from 4 – 7 pm, Monday, December 27, 2021 at Sproles Family Funeral Home. The Elks Lodge #484 will conduct a memorial service at 7:00 pm. You may send the family a personal condolence at www.sprolesfamilycares.com. The Sproles family and staff are honored to serve the family of Kermit Razor.

Kermit C. Razor, 83, of New Castle went home to be with the Lord on the morning of Tuesday, December 21, 2021 at Henry Community Health. He was born on August 10, 1938 in New Castle a son of Manuel W. and Lucille (Armstrong) Razor. Kermit... View Obituary & Service Information

The family of Kermit C. Razor created this Life Tributes page to make it easy to share your memories.

Send flowers to the Razor family.