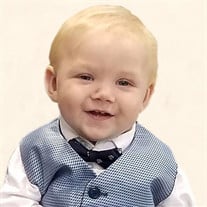 Our beautiful, bright eyed and always smiling, little love-bug, Kinsler Tate Mattingly, surrounded by his loving family, was welcomed into the waiting arms of Jesus on Friday, June 23, 2017 at the Dayton Children’s Hospital. He was born September 15, 2016 in Anderson, Indiana, a son of Brian and Sherissa (Everhart) Mattingly. Kinsler was always happy as a lark, smiling at everyone with his big, blue eyes sparkling. He was full of energy and loved to jump in his jumper seat. Kinsler loved wrestling with his brother, Deklin, who called him his “lil’ buddy” and would sing while Kinsler danced in his seat. Kinsler was unusually strong and was just beginning to pull himself up preparing to walk. He was already saying “Dada” and “Mama” and just within the past week had begun waving at people. Kinsler’s life was a brief gift to us that will live on as his vital organs are now sustaining life in those who were in need. Kinsler will be forever cherished in the hearts of his loving parents, Brian and Sherissa Mattingly of Hagerstown; his big brother, Deklin Avery Mattingly; grandparents, Phil and Carol Mattingly of Hagerstown and Paul and Phebe Kirk of New Castle; great-grandparents, Kenny and Mary Cowen of New Castle and Jack and Dura Roberts of Duncan Oklahoma; aunts and uncles, Bethany and Kyle Whitmire of Marshall, MO; Kenton and Danielle Everhart of Fishers, Jilayna Everhart of Celina, TX, Andrew and Misha Mattingly of Hagerstown and Steven and Autumn Mattingly of Hagerstown; also five cousins, Sam and Corbin Whitmire and Tameeka, Braylen and Daxton Mattingly. Kinsler arrived in heaven to the warm hugs of his grandpa, Rev. Samuel Everhart; great-grandparents, Floyd and Helen Everhart, Howard and Reba Mattingly and John Root Jr and great-aunt, Brenda Roberts. Funeral services will be held at 1:00 pm Wednesday, June 28, 2017 at Memorial Wesleyan Church with Pastors Paul Kirk and David “Chip” Bullock officiating. Burial will follow in West Lawn Cemetery in Hagerstown. Friends may call from 4 - 8 pm Tuesday at Sproles Family Funeral Home. Memorial contributions may be offered to the Kinsler Tate Mattingly Memorial Fund in care of Sproles Family Funeral Home. You may send the family a personal condolence at www.sprolesfamilycares.com. The Sproles family and staff are honored to serve the family of Kinsler Tate Mattingly.

Our beautiful, bright eyed and always smiling, little love-bug, Kinsler Tate Mattingly, surrounded by his loving family, was welcomed into the waiting arms of Jesus on Friday, June 23, 2017 at the Dayton Children&#8217;s Hospital. He was born... View Obituary & Service Information

The family of Kinsler Tate Mattingly created this Life Tributes page to make it easy to share your memories.

Send flowers to the Mattingly family.