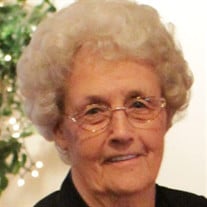 Lanie Adkins, 88, of Mooreland, went to be with the Lord on Thursday morning, February 8, 2018 surrounded by her family in her home. She was born August 15, 1929 in Elliott County, Kentucky, a daughter of the late Rev. William Thurman Ferguson and Effie (Roseberry) Ferguson. Lanie was a long-time member of the Northside Church of God and was faithful to clean the church each week for many years. She loved gospel music especially the Gaithers. Her greatest passion was her garden. She enjoyed being outside, caring for her flowers, canning vegetables and especially giving her produce to friends and family. Lanie married the love of her life, Bill Adkins and they enjoyed 25 years of marriage until his early death in 1970. She was employed by Brooks Foods for 49 years and The Waters of New Castle for 12 years. She enjoyed teaching her children, grandchildren and great-grandchildren how to garden and can vegetables. She is survived by three children, Wilma (Don) Green of New Castle, Delbert (Pam) Adkins and Roger (Sherry) Adkins both of Mooreland; 25 grandchildren, 20 great-grandchildren and eight great-great-grandchildren; a brother, Roger (Peg) Ferguson of St. Paris, Ohio; a sister, Julie Hays of Dayton, Ohio and several nieces and nephews. She was preceded in death by her husband of 25 years, William “Bill” Adkins; a daughter, Delpha Brewington; four brothers, Armel Ferguson, Henry Curtis Ferguson, Rev. William D. Ferguson and Earl Ferguson and two sisters, Delpha Raines and Daisy Yates. Funeral services will be held at 10:00 am Tuesday, February 13, 2018, at Sproles Family Funeral Home with Pastor Phil Brown and her son, Delbert Adkins officiating. Burial will follow in South Mound Cemetery. Friends may call from 4 - 8 pm Monday at the funeral home. Memorial contributions may be offered to the Henry County Hospice, Northside Church of God or American Cancer Society. You may send the family a personal condolence at www.sprolesfamilycares.com. The Sproles family and staff are honored to serve the family of Lanie Adkins.

Lanie Adkins, 88, of Mooreland, went to be with the Lord on Thursday morning, February 8, 2018 surrounded by her family in her home. She was born August 15, 1929 in Elliott County, Kentucky, a daughter of the late Rev. William Thurman Ferguson... View Obituary & Service Information

The family of Lanie Adkins created this Life Tributes page to make it easy to share your memories.

Lanie Adkins, 88, of Mooreland, went to be with the Lord on Thursday...

Send flowers to the Adkins family.