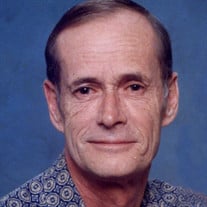 Larry Dean Rowe, 79, of Springport, formerly of Elkhart, passed away peacefully on the afternoon of Friday, January 25, 2019 at his home surrounded by his family. He was born on September 28, 1939 in Elkhart, IN, a son of the late James and Dorothy (Sharkey) Rowe. Larry was raised in Elkhart, IN, where he was hired as a Call Boy by the New York Central Railroad at the young age of 14. After many years in the railroad industry, he retired from Norfolk Southern Railroad in 2002 as an Engineer. Larry was very talented with his hands and restored old cars, especially the Ford Model A and Model T. He also enjoyed woodworking, fishing, camping and watching the wild life at home around his pond. Larry raised various types of geese, ducks, chickens and fed many other animals. He had a loving heart and was passionate for people without expecting anything in return. Larry helped his neighbors by plowing their driveways in the winter and volunteered at God’s Grain Bin in New Castle. Those left to cherish his memory include his wife, Sharron (Bunner) Rowe; four children, Robin Rowe of New Castle, Amy (husband: Jerry Jr.) Jarvis of New Castle, Scott Rowe of Springport and Mandy (husband: Dale) Fleming of New Castle; fourteen grandchildren, Megan, Wesley, Matthew, Sara, Katie, Kelcie, Nikki, Zachary, Hannah, Cory, Tony, Noah, Courtney and Aubry; nine great-grandchildren and a sister, Helen Leach of Elkhart. Along with his parents, he was preceded in death by a daughter, Laurie Ann Rowe; seven sisters and two brothers. Memorial contributions may be made to God’s Grain Bin or the American Cancer Society. The family will have a memorial service held at 2:00 pm on Saturday, February 9, 2019 at the Kingdom Hall of Jehovah's Witnesses in New Castle. You may send the family a personal condolence at www.sprolesfamilycares.com The Sproles family and staff is honored to serve the family of Larry Rowe.

Larry Dean Rowe, 79, of Springport, formerly of Elkhart, passed away peacefully on the afternoon of Friday, January 25, 2019 at his home surrounded by his family. He was born on September 28, 1939 in Elkhart, IN, a son of the late James and... View Obituary & Service Information

The family of Larry Dean Rowe created this Life Tributes page to make it easy to share your memories.

Send flowers to the Rowe family.