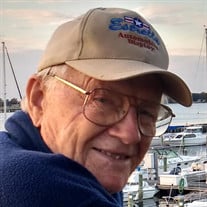 Leonard T. Ashburn, Jr., 90, died peacefully at home in Indianapolis, Indiana, on September 12, 2021. His wife and daughters were by his side in presence and prayer. Funeral services will be held on Thursday, September 16 at 11:30 a.m. at Second Presbyterian Church Sanctuary. Visitation will be from 10 to 11:30 a.m. in McFarland Hall. Len was born in Norfolk, Virginia, on October 29, 1930, to Elizabeth and Leonard Ashburn, Sr. He grew up in Norfolk and graduated from Granby High School in January 1949. He briefly attended The College of William and Mary before joining the U.S. Air Force. He later earned a Bachelor’s Degree in History from the University of Nebraska at Omaha in 1968 while on active duty. After two years of enlisted service in the Air Force, Len entered flight training and graduated in 1954 with his pilot wings and a commission as a second lieutenant. During his twenty years in the Air Force, he flew the KC-97, B26 and C141, was a flight instructor in the B25 and served as a safety officer. Among other places, he was stationed at Reese Air Force Base (AFB), Texas; Malmstrom AFB, Montana; Harmon AFB, Newfoundland, Canada; Pope AFB, North Carolina; Dover AFB, Delaware; and Tinker AFB and Altus AFB, both in Oklahoma. He accumulated 6500 flight hours during his career, which spanned the Korean and Vietnam Conflicts. When he retired from the Air Force in 1971, he moved his family to Indianapolis to be near the racing capital of the world and to indulge another lifelong passion--auto racing. Since attending his first Indianapolis 500 in 1956, Len missed only a few races. He’s a Lifetime Member of the Indianapolis 500 Oldtimers Club, with over 40 years of service at the Indianapolis Motor Speedway (IMS). He served in credentialed roles in Timing and Scoring and as a photographer at the IMS for decades. He was an early adopter of online race reporting with Prodigy Motorsports. He and his wife Linda opened a special risk insurance agency across from the IMS that served the racing industry. His love for motorsports extended to air racing. He was a member of the Reno Air Races Timing and Scoring Team for 26 years. He volunteered for the Contest and Records Board of the National Aeronautic Association (NAA), which coordinates and certifies national aviation and space records. In 1990, Ashburn chaired the 36th reunion of his Pilot Training Class held in Reno, Nevada, during the Reno Air Races. In community activities, Len was the founding President of the Speedway Kiwanis Club from 1987-1989. For over forty years, he was a dedicated member of Second Presbyterian Church, involved with the Sunday usher staff and the sanctuary choir. He also participated in Maennerchor, a German men’s choir founded in 1854 (disbanded in 2018 after 164 years). He is survived by his beloved wife of 42 years, Linda Weaver Ashburn, and five daughters from his first marriage; Elizabeth (Ken) McDonnell, Margaret Ashburn, Laura (Tom) Breece, Angie Mulkey, and Claire (Mark) Shervanick; also 11 grandchildren and 2 great-grandsons; and his sister Sarah Holder of Raleigh, NC. Following the services, Len will be buried at his family plot in Norfolk, Virginia. In lieu of flowers, the family requests that gifts in memory of Len be made to the Salvation Army by Clicking Here or the United Service Organizations (USO) by Clicking Here. Arrangements have been entrusted to the care of Sproles Family Funeral Home. You may offer the family a personal condolence at www.sprolesfamilycares.com. The Sproles family and staff are honored to serve the family of Leonard T. Ashburn, Jr.

Leonard T. Ashburn, Jr., 90, died peacefully at home in Indianapolis, Indiana, on September 12, 2021. His wife and daughters were by his side in presence and prayer. Funeral services will be held on Thursday, September 16 at 11:30 a.m. at Second... View Obituary & Service Information

The family of Major Leonard T. Ashburn Jr. created this Life Tributes page to make it easy to share your memories.

Send flowers to the Ashburn family.