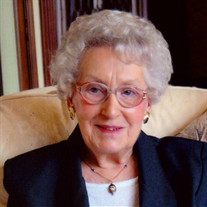 Lillian W. Mellott, 97, longtime resident of New Castle and most recently Greenwood, went home to be with the Lord on the evening of Tuesday, July 21, 2015 at Community Hospital South in Indianapolis. She was born on March 31, 1918 in West Liberty, West Virginia, a daughter of the late Claude and Margaret (Montgomery) Ray. Lillian was a graduate of West Liberty High School and West Liberty College. She was also a graduate of Martins Ferry Hospital School of Nursing as an RN. She worked at the clinic on Church Street and also as a private duty nurse. Lillian was employed at the New Castle State Hospital retiring in 1982 after 23 years of service. She was a member of Grace Baptist Church for over 30 years where she volunteered by assisting with the finances. Lillian attended Bible Study Fellowship and volunteered with the Tax Aid Program for several years. She enjoyed her grandchildren, great-grandchildren and reading. She is survived by her daughter, Claudia (husband: Vic) Koerner of Indianapolis; her son, Forrest (wife: Judy) Mellott of Greenwood; three grandchildren, Kristen (husband: James) Parker of Greenwood, Ryan (wife: Rebecca) Nordman of Fishers and Malea (husband: Kyle) Russell of Indianapolis; great-grandchildren, Griffin and Gannon Parker, Keaton, Blane, Keira, Julien, Stella and Scarlett Russell, and Noah, Molli, Chad, Emma, Michayla, Evie and Luke Nordman; step-grandson, Jonathan (wife: Hanna) Koerner of Washington, D.C. and several nieces and nephews. Lillian was preceded in death by her husband, Dale Mellott in 1965, four sisters, Sarah Paxton, Margaret Brumage, JoAnn Cline, and Olivia Noble and a brother, Mont Ray. Funeral services will be held at 12:00 p.m. Saturday, July 25, 2015 at Sproles Family Funeral Home with Pastors Denny Neal and Stan White officiating. Burial will be held privately in South Mound Cemetery. The family will receive friends from 10:00 a.m. until the time of service Saturday at the funeral home. Memorial Contributions may be offered to Grace Baptist Church. You may send the family a personal condolence at www.sprolesfamilycares.com. The Sproles family and staff are honored to serve the family of Lillian Mellott

Lillian W. Mellott, 97, longtime resident of New Castle and most recently Greenwood, went home to be with the Lord on the evening of Tuesday, July 21, 2015 at Community Hospital South in Indianapolis. She was born on March 31, 1918 in West... View Obituary & Service Information

The family of Lillian W. Mellott created this Life Tributes page to make it easy to share your memories.

Lillian W. Mellott, 97, longtime resident of New Castle and most...

Send flowers to the Mellott family.