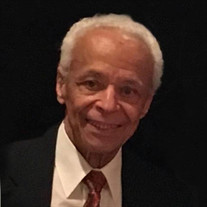 Lorenzo A. Eli, age 84, passed away peacefully on the evening of Friday, March 27, 2020, with family by his side. Lorenzo was born November 14, 1935 in Santo Domingo, Dominican Republic to Nathaniel and Caridad (Rodriguez) Eli. He received his medical degree in 1962 at the Autonomous University of Santo Domingo. In 1964, Lorenzo and his new bride, Melba, moved to New York City to begin his residency before practicing medicine in Massillon, Ohio. A decade later, Dr. Eli became the Medical Director of the New Castle State Developmental Center; he held that title for more than 20 years. In 1998, he retired from the state hospital. Dr. Eli also worked in private practice in New Castle, Anderson and Muncie. He was a devoted and loving husband, father, and grandfather. He will forever be remembered for his bright smile and infectious personality. Lorenzo never knew a stranger and sincerely cared for everyone who crossed his path. “Doc” Eli’s biggest passions were sports and music. He loved singing at Christmas Mass at St. Anne’s in New Castle and regularly attended concerts at Ball State University. His family and friends will miss his beautiful opera singing at weddings and birthdays. Lorenzo’s love for baseball inspired him to begin a youth team, appropriately named “The Medics.” He was a beloved baseball coach and surrogate father to many of his players. He will be dearly missed. He is survived by his wife of 57 years, Melba (Fernandez) and four children: Arthur (Rebecca), Melba (Timothy) Fox, Robert (Christie) and David (Sarah), as well as, 13 grandchildren. Also left to cherish his memory are his siblings; brothers, James (Nury), Henry (Maritza) and George (Miriam); and sisters, Gertrude and Mary (Diomedes), and many nieces and nephews. Lorenzo is preceded in death by his parents and brother Nathaniel. A private service will be held Thursday, April 2, 2020 at Sproles Family Funeral Home. A graveside service will follow at South Mound Cemetery in New Castle. Fr. John Kiefer will officiate. When circumstances allow and gathering restrictions are lifted, a public celebration of Lorenzo Eli’s life will be held in New Castle. You may send the family a personal condolence at www.sprolesfamilycares.com. The Sproles family and staff are honored to serve the family of Dr. Lorenzo A. Eli.

Lorenzo A. Eli, age 84, passed away peacefully on the evening of Friday, March 27, 2020, with family by his side. Lorenzo was born November 14, 1935 in Santo Domingo, Dominican Republic to Nathaniel and Caridad (Rodriguez) Eli. He received... View Obituary & Service Information

Lorenzo A. Eli, age 84, passed away peacefully on the evening...

Send flowers to the Eli family.