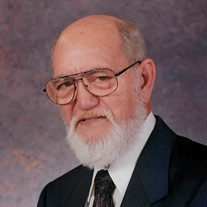 Lowell David Wardlow, age 85, of New Castle, IN passed away peacefully, Friday, October 19, 2018, surrounded by family. Born September 9, 1933, in Shirley, IN, he was the son of the late Carl Wardlow and Lois (Baker), Wardlow. Lowell proudly served in the U.S. Navy during the Korean War serving on the USS Toucan earning several medals and commendations. After completing his military service, he specialized in what was then cutting-edge technology of computer programming, supporting many industries in IN, TX, and NM. His hobbies included successfully raising a blended family, reading, anything technological and caring for his beloved cat, Mr. Belvedere. His favorite times were watching his grandchildren play football, softball, school/church recitals and anything that allowed him to be around his family. Lowell is survived by his wife of 46 years, Darlene (Shock) Wardlow, his brother, Larry and wife Joanne of Manchester, TN; sister, Anolie Cody of Franklin, Ohio, and sister-in-law, Vera Wardlow of Westfield, IN. Sons, David and wife Janell Wardlow of New Castle, IN, Greg and wife Brenda Wardlow of New Castle IN, Ehrin Wardlow of Auckland, NZ. Daughters, Gwen Fry of Sheraton, IN and Valerie Welch and husband Rick of Losantville, IN. Lowell was Step Pop to; Brent Grider of New Castle, IN Kent Grider and wife Janice of Connersville, IN, Trent Grider and wife Stacey of Highland, IN, Lynton Grider of Lewisville, TX, Nesa Grider-Hoagland and husband David of Granbury, TX. His grandchildren were his heart and joy, taking great pride in each one and their accomplishments. He is survived by 28 grand and 21 great-grandchildren; brother-in-law, O’Neal Witt; sister-in-law, JoAnne Wardlow, and many nieces and nephews. He was also preceded in death by his brothers, Donald, Earl, Macy, and Revillo; sister Reba Witt, two grandsons, Jason Wardlow and Daniel Seth Fry, and a son-in-law, Daniel Fry. Funeral services will be held at 1:00 pm Wednesday, October 24, 2018, at Sproles Family Funeral Home with Pastor Jim Becker officiating. Burial will follow in Mooreland Cemetery. Friends may call from 5 - 8 pm Tuesday at the funeral home. In lieu of flowers, the family requests donations in his honor to Journey to Dream at https://www.classy.org/give/173998/#!/donation/checkout a shelter supporting at-risk and homeless teens. You may send the family a personal condolence at www.sprolesfamilycares.com. The Sproles family and staff are honored to serve the family of Lowell David Wardlow.

Lowell David Wardlow, age 85, of New Castle, IN passed away peacefully, Friday, October 19, 2018, surrounded by family. Born September 9, 1933, in Shirley, IN, he was the son of the late Carl Wardlow and Lois (Baker), Wardlow. Lowell proudly... View Obituary & Service Information

The family of Lowell David Wardlow created this Life Tributes page to make it easy to share your memories.

Send flowers to the Wardlow family.