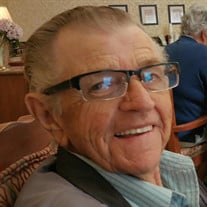 Luther “Duke” Upchurch, 81, of New Castle, passed away peacefully while surrounded by family and friends, at Reid Memorial Hospital in Richmond on February 9, 2017. Duke was born on August 6, 1935, to Frank and Bessie Upchurch in Slick Ford, Kentucky. Henry County residents remember Duke as an outgoing potato chip delivery man in his early years. Later, his passion for farming led him to become a successful farmer. His knowledge of agriculture, combined with his honesty and sincere desire to help others succeed led him to become an award-winning and respected Beck’s Seed provider to farmers throughout the county and beyond. Duke was a loving and generous man, loyal husband, father, grandfather, and mentor. His farming and business legacy continues today through Brandon King (wife Lindsay, and children) of Knightstown whom he has closely mentored for over 25 years. Mr. Upchurch was preceded in death by his parents; brothers, Arthur, Charlie, and Bill of New Castle; sister, Nadine Barr of Virginia, three infant brothers, and his former wife, Annetta Jean, who died in 1968. He is survived by his wife of 48 years, Marilyn Upchurch; son, Jeff Shelton (wife: Susan) and daughter, Connie Patton (husband: Junior) both of New Castle, daughter, Becky Rowe (husband John) of Centerville, son, Dan Upchurch (wife Michelle) of Tulare, CA, and son, David Upchurch (husband: Scott Taylor) of Sun City Center, FL. He is also survived by a sister, Irene Conyers; two brothers, Clay and Gary Upchurch of New Castle, seven grandchildren, six great-grandchildren, and one great-great-grandchild. Funeral services will be held at 11:00 am Tuesday, February 14, 2017, at Sproles Family Funeral Home with Rev. Gene Bennett officiating. Burial will follow in South Mound Cemetery West Lawn Addition. The family will receive friends from 4 - 8 pm Monday at the funeral home. Memorial Contributions may be offered to the American Heart Association. You may send the family a personal condolence at www.sprolesfamilycares.com. The Sproles family and staff are honored to serve the family of Luther “Duke” Upchurch.

Luther &#8220;Duke&#8221; Upchurch, 81, of New Castle, passed away peacefully while surrounded by family and friends, at Reid Memorial Hospital in Richmond on February 9, 2017. Duke was born on August 6, 1935, to Frank and Bessie Upchurch in... View Obituary & Service Information

The family of Luther "Duke" Upchurch created this Life Tributes page to make it easy to share your memories.

Send flowers to the Upchurch family.