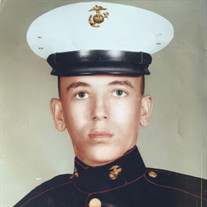 Manson L. “Peewee” McKenney Sr., 76, of Greenwood, Indiana, went home to be with the Lord on the evening of Tuesday, February 2, 2021, at Franciscan Health in Greenwood. He was born during a leap year on February 29, 1944, in Shelbyville, a son of the late Edmond and Gladys (McKinney) Stansifer. Manson joined the US Marines at age 17 and served two tours in Vietnam where he earned the Purple Heart medal. He operated a tank and served as section chief of three tanks. He married the love of his life, Sondra “Deloris” Roberts on March 6, 1981, and they enjoyed forty-one years together. Manson was a millwright for General Motors, Truck, and Bus in Indianapolis retiring following 45 years of employment. He was a pilot and loved to fly. Manson also enjoyed constructing model airplanes. He was a loving husband, father, grandpa, and great-grandpa. Those left to cherish Manson’s memory include his loving wife, Deloris McKenney; 13 children, Manson (Alicia) McKenney Jr., of Indianapolis, Robert (Kimmie) McKenney of Indianapolis, Marsha (Fred) Eicks of Greencastle, Penny (David) Martin of Kentucky, Gator (Crystal) Burton of Indianapolis, Misty (Tony) Wright of Indianapolis, Rocky (Amber) McKenney of Greenwood, Thomas “Scott” (Rachel) Roach of Martinsville, Todd Roach of Indianapolis, Dawn (Mark) Rozzel of Greenwood, Melissa (Tim) Keith of Indianapolis, Kristi (Danny) Johnson of Greenwood, and Kimberly (Reuben) Roach of Greenwood; 41 grandchildren; 37 great-grandchildren and four on the way; a son he considered his own, Mark Salcedo of Indianapolis; a very close friend of the family, Donnie Barnhart of Mooresville; three sisters, Diana (Dale) Marr of Morgantown and Nancy (Jack) Tomlinson of Camby, and Janet Marine of Camby; a brother, Ross (Gloria) Walker of Plainfield, and several nieces and nephews. In addition to his parents, Manson was preceded in death by a son, Joseph McKenney; a granddaughter, Heavenly Angel McMullen; a daughter-in-law, Kathy McKenney, and a brother, Stephen Stansifer. Funeral services will be held at 9:00 am Saturday, February 6, 2021, at Independent Nazarene Church, 5152 Hornet Ave. Beech Grove, Indiana, 46107, with Pastor Don Bates officiating. Burial will follow in Forest Lawn Memory Gardens in Greenwood with military honors. You may view the service online at 9 am Saturday by Clicking Here Visitation from 4 - 8 pm Friday at the church. Arrangements have been entrusted to the care of Sproles Family Funeral Home in New Castle. You may send the family a personal condolence at www.sprolesfamilycares.com. The Sproles family and staff are honored to serve the family of Manson L. McKenney.

The family of Manson L. McKenney Sr. created this Life Tributes page to make it easy to share your memories.

Send flowers to the McKenney family.