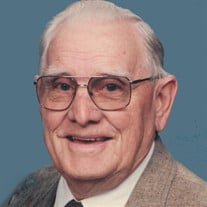 Manuel W. Razor, 98, of New Castle, passed away peacefully on Wednesday, March 2, 2016 at Heritage House. He was born on February 22, 1918 in Salt Lick, Kentucky, a son of the late George Washington and Hazel Lee (Vanlandingham) Razor. Loving husband of 60 years to June Fleur (Haynes), whom he married on November 12, 1955. Manuel served his country in the United States Army during WWII. He earned the rank of Staff Sargent, the Purple Heart after being wounded three times was awarded and the Silver Star award for his combat leadership. He retired from Chrysler Corporation after 31 years, as well as a former farmer and truck driver. Manuel was known for owning and restoring Model “A” Fords and other vintage cars. As a couple, Manuel and June shared a true love story, spending winters at Dania Beach Florida, riding around town in vintage cars, attending Calvary Baptist Church and being with family. Those left to cherish his memory are his sons, Kermit (wife: Mary Kay) Razor of New Castle and Kim (wife: Chris) Razor of Speedway; step-sons Thomas (wife: Bonnie) Stellwag of Merritt Island, FL, Michael “Paul” (wife: Debby) Stellwag and Joseph Stellwag both of Muncie; 11 grandchildren, 17 step-grandchildren, several great-grandchildren, and several nieces and nephews. In addition to his parents, he was preceded in death by five brothers, four sisters and a daughter, Loretta Mae Moscrib in 1989. Funeral services will be held at 11:30 a.m. on Saturday, March 5, 2016 at Sproles Family Funeral Home with Rev. Bobby Slagle officiating. Burial will follow in South Mound Cemetery West Lawn Addition. Family will receive friends before the service, beginning at 9:30 a.m. You may send the family a personal condolence at www.sprolesfamilycares.com. The Sproles family and staff are honored to serve the family of Manuel Razor.

The family of Manuel W. Razor created this Life Tributes page to make it easy to share your memories.

Manuel W. Razor, 98, of New Castle, passed away peacefully on...

Send flowers to the Razor family.