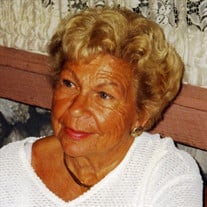 Marian Elaine (Harlow) Prior, 94, a New Castle resident, passed away peacefully in her home on Sunday, July 1, 2018. She was born on February 15, 1924 in Huntingburg, Indiana, a daughter of the late Robert Leslie Harlow and Hazel (Winkler) Harlow. Marian married the love of her life, Paul W. Prior, Sr. on July 1, 1944 in Hutchinson, Kansas. They were blessed with 73 years of marriage until Paul’s death on January 2, 2018. Marian enjoyed spending time with her family, was an avid reader, an excellent cook and enjoyed searching for and restoring antiques. Among her many talents, she had a special flair for interior design and put those abilities to work in her home. She and Paul also enjoyed the outdoors and spent many hours planning and working in their flower garden. Marian had many fond memories of assisting her husband and his staff with “special projects” when he was Chief Executive Officer of Fidelity Federal Savings in Seymour, IN and President of Henry County Savings and Loan Association (Ameriana Bank) in New Castle. She hosted many social functions and traveled extensively with Paul on numerous trips all over the United States and various foreign countries when he served as President of the United States League of Savings Institutions. Marian and Paul shared a lifetime of wonderful memories, but one distinct and very fond memory that Marian had was an event that occurred in April 1974 when she and Paul had the opportunity to host a special overnight houseguest at their home, Astronaut Eugene A. Cernan, while he visited Henry County to be the speaker at the dedication of the Wilbur Wright Memorial. At the conclusion of the Wilbur Wright dedication, the Priors hosted a luncheon at their home for Captain Cernan and other dignitaries that included, Governor Otis Bowen and former Governor Edgar D. Whitcomb. Marian is survived by her brother, William “Tooter” (wife: Jeannie) Harlow of Brownsburg, IN; daughter-in-law, Carolyn Prior of Evansville, IN; several nieces, nephews and many special friends. Along with her parents and husband, she was preceded in death by her two sons, Paul W. “Bill” Prior Jr. and Roger Allen Prior; three sisters, Mildred Melaskie, Phyllis Dameron and Dorothy Egg and one brother, Robert Harlow. A graveside memorial service will be held at 11:00 am on Wednesday, July 11, 2018 at South Mound Cemetery in Section 6, alongside the Prior Memory Garden. Memorial contributions may be made to the Prior Memory Garden – c/o Henry County Community Foundation P.O. Box 6006, New Castle, IN 47362. Arrangements have been entrusted to the care of Sproles Family Funeral Home. You may send the family a personal condolence at www.sprolesfamilycares.com The Sproles family and staff is honored to serve the family of Marian Prior.

Marian Elaine (Harlow) Prior, 94, a New Castle resident, passed away peacefully in her home on Sunday, July 1, 2018. She was born on February 15, 1924 in Huntingburg, Indiana, a daughter of the late Robert Leslie Harlow and Hazel (Winkler)... View Obituary & Service Information

The family of Marian Elaine Prior created this Life Tributes page to make it easy to share your memories.

Send flowers to the Prior family.