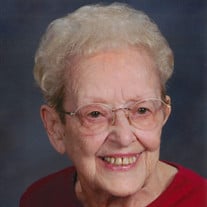 Mary E. (Matney) George, 96, of New Castle, passed away Monday, April 6, 2015 at Glen Oaks Health Campus. She was born September 28, 1918 in New Castle, a daughter of the late Floyd and Beatrice (Harris) Matney. Mary attended New Castle High School and was employed at Delco Remy Plant 303 in Anderson, retiring in 1987 after 37 ½ years of service. She was a member of St. Anne Catholic Church and was a former member of the United Auto Workers. She was an avid New Castle Trojans and IU Hoosiers basketball fan. Mary enjoyed traveling and had visited Alaska, Newfoundland, Hawaii and the Arctic Circle. She also enjoyed crocheting and creating baby blankets and afghans until her eyesight prevented her from doing so. Mary loved cooking and was well known for her potato salad, pineapple salad and cheeseballs. She is survived by a daughter, Grace Jackson-Riley of New Castle; a granddaughter, Theresa (husband: Rick) Pierce of Mooreland; a grandson, Curtis (wife: Lisa) Jackson of New Castle; four great-grandsons; several great-great-grandchildren; a brother-in-law, Ray O. Frost of New Castle; a sister-in-law, Alice Matney of Jacksonburg and several nieces, nephews and cousins. In addition to her parents, she was preceded in death by her brothers, Roscoe, William, Robert and Howard Matney; her sisters, Margaret Matney, Helen J. White and Martha Jane Frost and two sons-in-law, Gene Jackson and Charles C. Riley. A Mass of Christian Burial will be celebrated at 1:00 p.m. Friday, April 10, 2015 at St. Anne Catholic Church with Father Joe Rautenberg and Deacon Russ Woodard officiating. Burial will follow in St. Anne Catholic Cemetery. Friends may call from 11:00 a.m. – 1:00 p.m. on Friday at the church. Memorial contributions may be offered to St. Anne Catholic Church. Arrangements have been entrusted to the care of Sproles Family Funeral Home. You may send the family a personal condolence at www.sprolesfamilycares.com. The Sproles family and staff are honored to serve the family of Mary George.

The family of Mary E. George created this Life Tributes page to make it easy to share your memories.

Send flowers to the George family.