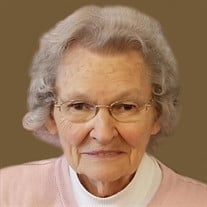 Mary Louise Root Cowen, 92, of New Castle, passed away on Wednesday, June 2, 2021 at Henry Community Health in New Castle. She was born on July 22, 1928 in New Castle, a daughter of Gwynn and Lola (Hamm) Blevins. Mary grew up in rural Henry County on a family farm. She graduated in 1946 from Hagerstown High School and later attended Ball State University in the nursing program. She married John C. Root Jr. on August 22, 1947. Mary worked for many years as the cook for Dalton School as well as Hagerstown Elementary. She ministered with her husband and children as song evangelists in many revivals and camp meetings. Following her husband’s passing in 1975, Mary moved to Overland Park, KS and ministered at KCCBS where she held several positions. She met Kenneth Cowen and they were married on April 14, 1984. Together they moved to Union Bible College in Westfield, IN where they also ministered in various positions. Through the years she supported Kenny in his pastorates at several Church of God (Holiness) churches in Boonville, Macon and Brush Arbor, all of Missouri, before retiring to New Castle in 2014. Mary enjoyed her time living and fishing at Lake Taneycomo in Missouri. She also enjoyed quilting, sewing, stain glass, reading, writing and was a published author of a children’s book. Mary loved spending time with her family and hosting meals in her home. Those left to cherish her memory include her husband, Kenny Cowen of New Castle; children, John D. (Linda) Root of Economy, Michael D. (Gayle) Root of Decatur, Alabama, Carol (Phil) Mattingly of Hagerstown, Robert “Bob” J. (Natalie) Root of New Castle and Dawn Elaine (Jack) Hayward of Buffalo, MO; 17 grandchildren; 22 great-grandchildren and several nieces and nephews. In addition to her parents, she was preceded in death by her first husband, John C. Root Jr.; daughter, Mary L. Root; daughter-in-law, Shirley Root; special great-grandsons, Kinsler Tate Mattingly and Gabriel Root; siblings, Frank Blevins, Robert Blevins, Madge Thompson, and Ted Blevins. Memorial contributions may be offered to The Gideons International for Bibles. www.gideons.org/donate Funeral services will be held at 10:00 am, Wednesday, June, 9, 2021 at Sproles Family Funeral Home with Rev. Kenneth Cowen and Pastor Ron Coleman officiating. Burial will follow at Brick Cemetery in Hagerstown. Friends may call from 5 – 7 pm, Tuesday, June 8, 2021 at the funeral home. You may send the family a personal condolence at www.sprolesfamilycares.com. The Sproles family and staff are honored to serve the family of Mary Cowen.

Mary Louise Root Cowen, 92, of New Castle, passed away on Wednesday, June 2, 2021 at Henry Community Health in New Castle. She was born on July 22, 1928 in New Castle, a daughter of Gwynn and Lola (Hamm) Blevins. Mary grew up in rural Henry... View Obituary & Service Information

The family of Mary Louise Root Cowen created this Life Tributes page to make it easy to share your memories.