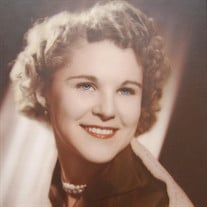 Mary Jeanette Stonerock, 91, of Greenfield and formerly of New Castle, died on the morning of Wednesday, March 27, 2019 at Golden Living Center in Greenfield. She was born on July 26, 1927, in New Castle, a daughter of the late Robert and Peggy Ann (Wagner) Click. Jeanette was raised in New Castle and attended New Castle High School, where she graduated in 1946. During WWII, Jeanette worked in a factory to help with the war effort. Following WWII, she worked at Kresge’s Department Store, the forerunner of Kmart. In 1947, she began her career as a telephone operator for Indiana Bell and was asked to serve at Camp Atterbury as a PBX Operator during the Korean conflict. She was a member of the First Baptist Church when she lived in New Castle, and her childhood home was demolished to build its sanctuary, in which she would later marry her husband, James A. Stonerock, in 1958. Jeanette continued as a switchboard operator for the Mayflower Moving Company in Indianapolis. She also worked at Carson Chemicals and ran a successful business cleaning houses. She was most devoted to raising and loving her four children. During her long retirement, she often traveled with and visited her children and grandchildren in Hawaii, Georgia, and North Carolina. She loved her pets, enjoyed decorating and interior design, and was a devoted fan of horror movies and spooky television shows. She loved all things chocolate, piping-hot coffee, Wick’s pies, and Abbott’s Candies. For many years, she also lived in Cambridge City, where she enjoyed sitting on her balcony porch and exercising at the Golay Center. Those left to cherish her memory include her four children, Paul Stonerock (Becky), Jama Otteson (Richard), Peggy Ann Bowker (Steve) and Rob Stonerock (Cynthia); nine grandchildren; several great-grandchildren; and a brother, Dale Click. Along with her parents, she was preceded in death by her husband, James A. Stonerock, and a brother, Dan Click. Visitation will be held from 1 – 3 pm, Saturday, March 30, 2019 at Sproles Family Funeral Home to celebrate Jeanette’s life, along with a time of sharing to begin at 3:00 pm. You may send the family a personal condolence at www.sprolesfamilycares.com The Sproles family and staff is honored to serve the family of Jeanette Stonerock.

Mary Jeanette Stonerock, 91, of Greenfield and formerly of New Castle, died on the morning of Wednesday, March 27, 2019 at Golden Living Center in Greenfield. She was born on July 26, 1927, in New Castle, a daughter of the late Robert and Peggy... View Obituary & Service Information

The family of Mary Jeanette Stonerock created this Life Tributes page to make it easy to share your memories.

Mary Jeanette Stonerock, 91, of Greenfield and formerly of New...

Send flowers to the Stonerock family.