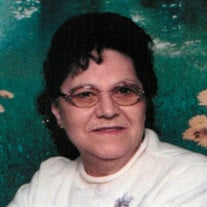 Melba Jean (Lawton) Miller, 80, of Shirley, passed away on the afternoon of Monday, September 11, 2017 at Hancock Regional Hospital. She was born on July 25, 1937 in Spiceland, a daughter of the late Frank and Susie (Chew) Lawton. Melba Jean... View Obituary & Service Information

The family of Melba Jean Miller created this Life Tributes page to make it easy to share your memories.

Send flowers to the Miller family.