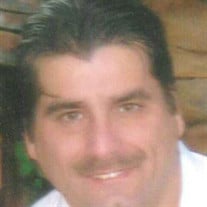 Michael “Shane” Whitehead, 43, of Surprise, Arizona, passed away Saturday, June 20, 2015 in Surprise, Arizona. He was born February 29, 1972 in Muncie, a son of Linda (Hosea) Melton and Larry Hale Whitehead. Shane was a 1991 graduate of New Castle Chrysler High School and was a former member of the Elks Lodge in New Castle. He loved sports and enjoyed fishing, NASCAR and was a die-hard Arizona Cardinals and Arizona Diamondbacks fan. Shane loved his family and spending time with them and especially loved his dogs, Houston and Dexter. He served his country in the United States Navy for six years and was employed as a Chef at the Wow Café in Surprise, Arizona. He is survived by his mother, Linda (husband: Alan) Melton of New Castle, his fiancé, Christine Riggs of Surprise, Arizona; his son, Spencer Michael Whitehead of Marion; his fiancé daughters, Crystal Riggs and Michelle Cridge both of New Castle and their children, Chelsea, Nakaya and Soraya; his grandmother, Jean Shallenberg of New Castle; his step-sister, Samantha (husband: Ronnie) Overton of New Castle; a special uncle, David (wife: Terri) Hosea of New Castle; his father, Larry Whitehead; special cousins, Jonathon Hosea, Evan Hosea and Abby Walden; his uncles, Mike (wife: Peggy) Hosea of Kokomo, Jerry (wife: Rhonda) Whitehead, David (wife: Sandy) Whitehead, Harry (wife: Connie) Whitehead and several cousins. He was preceded in death by two brothers, Larry Todd Whitehead and John Travis Whitehead; his grandfather, Mike Shallenberg and his great-grandparents, Carl and Catheryn Dalton. Funeral services will be held at 12:00 p.m. Friday, June 26, 2015 at Sproles Family Funeral Home with Pastor Jeff Burger officiating. Burial will follow in South Mound Cemetery, Legion Hill. Military honors will be provided by a contingent from the US Navy and the American Legion and the VFW. The family will receive friends from 10:00 a.m. until time of service Friday at the funeral home. To assist the family with funeral expenses, memorial contributions may be offered in care of the funeral home. You may send the family a personal condolence at www.sprolesfamilycares.com. The Sproles family and staff are honored to serve the family of Shane Whitehead.

The family of Michael "Shane" Whitehead created this Life Tributes page to make it easy to share your memories.

Send flowers to the Whitehead family.