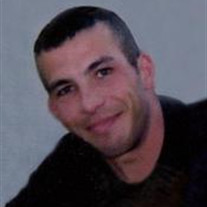 Michael Allen Wise II, died July 14, 2011 in Dayton, Ohio, following a long battle. He was born December 10, 1974, the son of Michael and Doris (Blackburn) Wise. Michael was a 1993 graduate of New Castle Chrysler High School. He joined the Army National Guard on February 2, 1993 and served as an excellent soldier until leaving the Army in 2009. While in the military he served in many missions overseas including over a year in Afghanistan where he served in security for high ranking officials and led life saving missions. He believed in protecting the freedoms of the United States of America, One Nation Under God. Michael loved his family, his dog, Byd, and our country. He loved to fish, camp, hunt and go junk yard diving. He had a quick wit and loved to joke and make people laugh. His smile was contagious. Left to always remember and love Michael are his parents; his wife, Devin (Revalee) Wise; two sisters, Paula (husband: Joseph) Anderson and Amy (husband: Marlon) Fannin; nieces and nephews, Nathaniel, Isaiah, Ivy, May, and Katie Anderson, Robert Michael and Kathryn Perry; his grandfather, Andrew (wife: Mary) Wise and several aunts, uncles and cousins. He was preceded in death by his grandparents, Delmer and Arlene Blackburn and his grandmother, Esther Wise. Funeral services will be held privately. Memorial contributions may be made to Teen Challenge International, 440 E. Pontaluna Rd., Muskegon, MI 49444. You may send the family a personal condolence at www.sprolesfamilycares.com. Sproles Family Funeral Home is honored to serve the family of Michael Wise II.

The family of Michael Allen Wise created this Life Tributes page to make it easy to share your memories.

Send flowers to the Wise family.