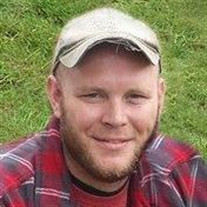 My beautiful, charming son, Monty Hiatt Ervin, lost his life due to injuries sustained in a motor vehicle accident on the evening of Friday, February 12, 2016. He was only 31 years old but, in those 31 years Monty did more living than most do in 100 years. Monty was born October 1, 1984 in Muncie, Indiana, a son of Glen Ervin Jr. and Stacy (Price) Mehaffey, and was a firecracker from the moment he arrived wide eyed and raring to go. He never wanted to be snuggled or cuddled but rather preferred constantly looking to see what was going on around him. By seven months, when most babies are learning to sit up, he took off running…and never did slow down. He was a friend to all, whether he knew you or not and had no problem striking up a conversation with a perfect stranger. This was a task he had mastered by the age of one as he reached for random shoppers in the grocery store wanting to make new friends. Monty excelled in baseball and basketball playing through a completely severed ACL for his last two years of high school and ditching the cumbersome brace prescribed by the orthopedist because it “slowed him down.” Going out in style on senior night at Union High School in 2003, Monty set the school single basketball game scoring record with 48 points. Monty was never one to let anything slow him down. He worked hard his entire life and always had a couple things going on the side. Of all his accomplishments, Monty was most proud of his two little angels, Maleigh and Aberee. He loved them without limits and would have moved heaven and earth to give them everything they ever needed. He often talked about making memories with his daughters and I hope these are stored up in their hearts to carry with them through the rest of their years. Monty is now at rest and free from the pain of this world. Please hold him close as I do and remember the times he made you laugh or smile or gave one of his fabulous heartfelt hugs. Remember his huge heart and giving nature. Monty is reunited in heaven with his cousin, Garrett Swaim, and his grandfather, Bill Price, and I would imagine they have already thrown a line with him into their favorite fishin’ hole. Left to remember his legacy of love are his two daughters Maleigh Ervin and Aberee Ervin; his parents, Stacy (Chip) Mehaffey and Glen (Lisa) Ervin Jr.; one brother, Chad (Samantha) Ervin; one sister, Whitney (Dave) Andrews; one step-brother, Johnny Ervin and two step-sisters, Chelsea Ervin and Mackenzie Mehaffey. He also leaves his maternal grandmother, Marcella Price, and paternal grandparents, Glen (Lisa) Ervin and Sylvia (Warren) Klein as well as numerous aunts, uncles, cousins, nieces and nephews. Funeral services will be held at 11:00 a.m. Tuesday, February 16, 2016 at the Losantville Separate Baptist Church with Pastor Mike Thornburg officiating. Burial will follow in Riverside Cemetery. Friends may call from 4 - 8 p.m. Monday at Sproles Family Funeral Home in New Castle. The family requests that in lieu of flowers donations be made to the Monty Ervin Memorial Fund in care of Sproles Family Funeral Home with envelopes available, by phone, 765-521-2400 or at https://www.gofundme.com/zgxn5xw4. You may send the family a personal condolence at www.sprolesfamilycares.com. The Sproles family and staff are honored to serve the family of Monty Ervin.

My beautiful, charming son, Monty Hiatt Ervin, lost his life due to injuries sustained in a motor vehicle accident on the evening of Friday, February 12, 2016. He was only 31 years old but, in those 31 years Monty did more living than most... View Obituary & Service Information

The family of Monty Hiatt Ervin created this Life Tributes page to make it easy to share your memories.

Send flowers to the Ervin family.