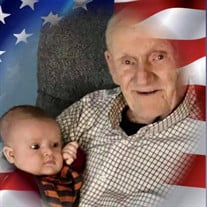 Moral “Red” C. Underhill Sr., 77, of Muncie passed away peacefully on the morning of Tuesday, August 10, 2021. He was born on November 15, 1943 in Royerton, Indiana, a son of the late Charles C. and Elizabeth Ann Underhill. Moral was raised in Muncie and in 1961 enlisted in the United States Army and served during Vietnam. He was married to his wife, Peggy, on September 2, 1972. Moral was a self-employed painter and painted large antennas as well as residential properties. He also worked as a School Crossing Guard for Southview Elementary and later for East Washington Academy. He held memberships with AMVETS and Knights of Columbus. Moral enjoyed Bingo, fishing, camping, cooking out and spending time with his family. Those left to cherish his memory include his loving wife of 49 years, Peggy Underhill; children, Buttons (Dion) Brooks, Moral (Teresa) Underhill Jr., James (Wilma) Underhill Sr., Pebbles (Michael) Fredericks, Bobby Peters, Danny Underhill, Diane (Larry) Bousman and many grandchildren, great-grandchildren and a brother, Charles David Underhill. In addition to his parents, he was preceded in death by a great-grandson, Abel Mathis and sisters, Doris Beckham and Nancy Dawson. Funeral services will be held at 1:00 pm on Friday, August 13, 2021 at McCormick View Chapel 2010 E. Perdue Rd. Muncie, IN 47303 with Pastor Scott Miller officiating. Burial will follow at Beech Grove cemetery with military honors conducted by the United States Army and American Legion. Friends may call from 11 – 1 pm prior to the service at the church. Following the services, a meal will be provided by Moral Jr. and Teresa at their home, 10705 N. Faye Ave. Muncie, IN 47303. You may send the family personal condolences at www.sprolesfamilycares.com. The Sproles family and staff are honored to serve the family of Moral Underhill Sr.

The family of Moral C. Underhill Sr. created this Life Tributes page to make it easy to share your memories.

Send flowers to the Underhill family.