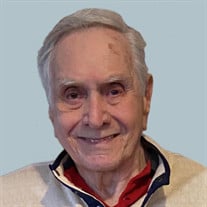 Omer J. Auxier, 85, of New Castle, died unexpectedly on Wednesday, February 16, 2022. He was born November 3, 1936 in Chicago, Illinois, a son of the late Denver and Virginia (Heldt) Auxier. Omer attended Jr. High and some high school in Spiceland, Indiana, before moving to New Castle, where he graduated in 1955. He enlisted in the US Army, serving three years in Japan and a year in Hawaii. After leaving the service, he lived in California before returning to New Castle in 1964, where he secured a management position with Chrysler Corporation and worked until his retirement in 1990. After one blind date with Cheryl (VanBuskirk) Paul, he knew he had met the woman he would marry. They married on March 10, 1967, and he assumed the role of husband and father to daughter, Nancy. 1970 completed the family when their son Brian came along. The retirement years were spent traveling and “snowbirding” in Florida. Since being widowed, Omer spent all of his time and love on his children and remembering all the happy years spent with his family. Omer is survived by his two children, Brian K. Auxier and Nancy G. Paul both of New Castle, who will miss his wit and steady guiding voice dearly. In addition to his parents, Omer was preceded in death by his treasured wife of 48 years, Cheryl A. Auxier in 2015 and his two brothers, Denver Auxier Jr. and James Auxier. Funeral services will be held at 11:00 am Tuesday, February 22, 2022 at Sproles Family Funeral Home with Rick Schoeff officiating. Burial will follow in Glen Cove Cemetery in Knightstown. Friends may call from 5 – 8 pm Monday at the funeral home. You may send the family a personal condolence at www.sprolesfamilycares.com. The Sproles family and staff are honored to serve the family of Omer Auxier.

The family of Omer J. Auxier created this Life Tributes page to make it easy to share your memories.

Send flowers to the Auxier family.