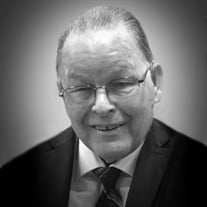 Rev. Orba Jefferson “Buddy” Perry Jr., 75, of Anderson, was welcomed to his heavenly home by the Savior he so faithfully served on Monday morning, August 17, 2020. He was born on January 19, 1945 in Houston, Texas, a son of the late Orba Jefferson Perry Sr., and Mildred Mae (Hunter) Perry. Lovingly known to all as “Uncle Bud”, he was a man of deep integrity. He was faithful, dependable, consistent, humble, loving, and caring. He never knew a stranger and in his Texas drawl was always quick to encourage with the words “Hang in there and keep your chin up”. Buddy felt a call to preach the gospel of Jesus Christ at the age of 17. He met the love of his life and faithful companion, Aletha Jane Staley, at Bethany Nazarene College in Bethany, Oklahoma. They were married on June 12, 1965. Shortly thereafter, they moved to Indiana to attend Union Bible Seminary. Buddy then went on to complete his education at Covenant Foundation College where he was one of the first two graduates. In those early years, he served as pastor in New Castle, Greenfield, and his hometown of Houston before settling in Anderson. God gave Buddy and Jane 21 wonderful years of ministry there at the Grace Holiness Church. In November of 1986, Uncle Bud helped establish the International Conservative Holiness Association (ICHA) and served as its General Chairman for 31 years. He poured his heart and soul into this ministry, its campground, and people. He was in his element walking the grounds during family, youth, and kid’s camp; always chatting, welcoming, and loving everyone. He loved the ICHA Campground and gave generously of his time and resources to ensure its upkeep and growth. Perhaps the deepest passion of his heart was that of foreign missions. He was drawn to the cause and to the people. He loved them like family and would leave a piece of his heart every time he visited. He made 34 trips to Honduras as well as trips to South Africa, Haiti, Guatemala, and Mexico. For anyone who knew Uncle Bud, they knew another of his love’s was going salmon fishing in Michigan. There have been so many amazing memories made in the last 43 years of him, his sons, grandsons, and preacher friends all packing up to spend a few days on the riverbank. These times were spent laughing, swapping stories, and experiencing that ever exciting feeling associated with “fish-on”! Buddy truly loved his boys and loved sharing Michigan with them. Buddy’s greatest love was for his family. He loved every one of them so much! He cherished every single moment he could spend with them. Whether eating out, sitting on the porch chatting, or attending one of the grandchildren’s birthday parties, he was always in touch with them and aware of what was going on in their lives. His frequent phone calls and steady presence were a constant source of encouragement to his children and grandchildren. Those left to cherish Buddy’s memory include his wife of 56 years, Jane Perry; three children, Jeff (Marci) Perry of Martinsville, Jon (Jules) Perry of Norman, and Elizabeth (Jason) Arnett of Alexandria; 10 grandchildren, Jeannette (Caleb) Wedemeyer, Josh (Bree) Perry, Jana (Caleb) Pugh, Tanner Waldrip, Alyssa Hester, Ashley Perry, Jonathan Perry, Brianna Verdin, and Jackson and Jenson Arnett; six great-grandchildren, Jake Perry, Ezra Wedemeyer, Owen Wedemeyer, Nora Pugh, Adrian Groover, and Harmony Groover; two daughters-in-law, Joy Leath of Indianapolis and Angela Pratcher of Anderson; a brother, Robert (Misty) Perry of TX; two sisters, Sharon (Jimmy) Luna of TX and Barbara (Olen) Ferguson of OK; a brother-in-law, O’Neal Foley of TX; and two sisters-in-law, Hazel Perry and Gladys Perry both of TX and many nieces and nephews. In addition to his parents, he was preceded in death by a sister, Lillie Foley, and three brothers, Charles, Samuel, and Carl Perry, Sr. Due to Covid 19 and the desire of the family for everyone’s safety, a drive-through visitation will be held from 2:00 pm - 8:00 pm Friday, August 21, 2020 at the Buddy and Jane Perry Tabernacle, ICHA Campground, 4485 N. Fortville Pike in Greenfield. You will be able to view Buddy and greet the family briefly while remaining in your vehicle. A private family service will be livestreamed here at 1:00 pm EST, Saturday, August 22, 2020 with Rev. Rollin Mitchell officiating and the burial to follow. For 31 years, Buddy Perry had the honor of standing on the platform in the beautiful setting of the ICHA campground. Surrounded by the congregation he loved, he would raise money for different causes related to the ICHA ministry. He did this hundreds of times and the people gave willingly, generously, and from their hearts. His ultimate dream was to see the campground paid in full before he went to heaven. Although he did not live to see this accomplished, his family would like to give one last opportunity to make his dream come closer to a reality. In lieu of flowers, would you please consider making a generous donation to the dream that Uncle Bud believed in so much. Your donation will be applied directly to the principal on the campground loan. donate here. Thank you for your consideration of this offer and as Uncle Bud would always say in conclusion, “The Lord will bless you”. You may offer the family a personal condolence at www.sprolesfamilycares.com. The Sproles family and staff are deeply honored to serve the family of Rev. Orba “Buddy” Perry.

The family of Rev. Orba Jefferson "Buddy" Perry created this Life Tributes page to make it easy to share your memories.

Send flowers to the Perry family.